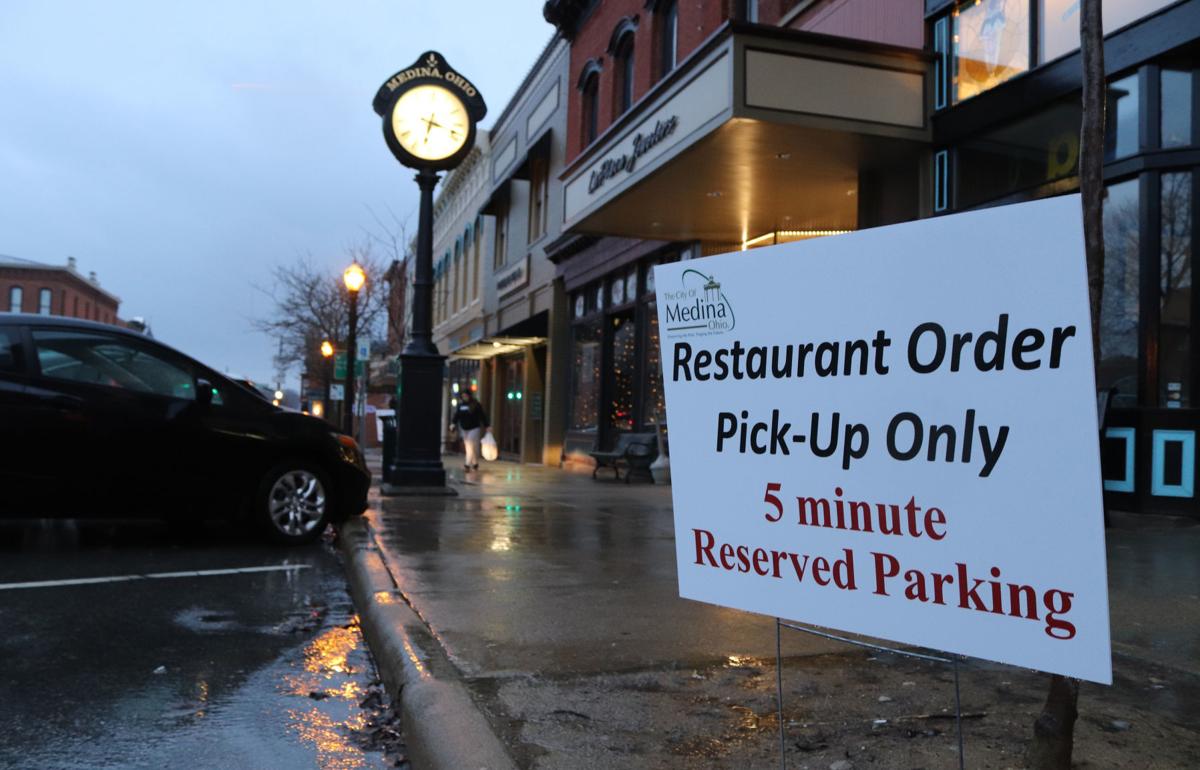 In addition to suspending parking enforcement in the Historic District, the city of Medina has erected signs outside of food establishments designating reserved parking spots for pick-up orders.

In addition to suspending parking enforcement in the Historic District, the city of Medina has erected signs outside of food establishments designating reserved parking spots for pick-up orders.

MEDINA – The city's central business district is hurting and so, too, is its biggest champion.

The current state of Medina's Public Square and surrounding nine-block Historic District paints an accurate picture of the bleakness associated with the COVID-19 pandemic and ensuing state-mandated closure of most businesses. Bars are closed and eateries are limited to take-out only, while other non-food businesses have been forced to either scale back operations or close – whether temporarily or permanent, however, remains to be seen.

To Main Street Medina – the nonprofit dedicated to the economic wellbeing of the district and its dozens of member businesses – it's a frightening sight.

"This is not going to be an overnight fix," said Matt Wiederhold, Main Street's executive director for 11 out of the last 12 years. "Long term, we don't know what's going to happen. We hope it doesn't go back to the recession of 2008 when we had 13 vacancies on the square."

For the better part of time since that particular major economic downturn, Public Square's storefronts have been either at 100 percent occupancy or close to it. The district depends greatly on foot traffic, which is stoked by Main Street's staple special events in Public Square's Uptown Park, all of which are on hold through, at least, April. Those include Ice Fest, Medina Fest, Pizza Palooza, First Fridays and beyond, annually bringing about 150,000 people to the little district and equating to a $1.5 million boost to the local economy.

"COVID-19 has essentially turned the Historic District into one big drive-thru," Wiederhold said. "You look at three of the city's main traffic generators in general – Root Candles, High Voltage Karting (and the adjoined Foundry Social), Castle Noel – they're closed."

But Wiederhold still sees gleams, especially in how the business community has banded together to promote and support each other. There are several locally-trending online topics trending like #MedinaStrong, #HelpingOurNeighbors and "IcareForTheSquare. Main Street, as well, continues to post business news and specials from those open on its website and social media accounts.

"They're stopping in to each other's shops, promoting each other online – businesses that compete with each other and are all out chasing the buck. We're all in this together and they realize that," Wiederhold said. "It's very heartwarming. Everyone's doing the best they can."

They're also getting creative in their marketing. Cool Beans Cafe at the corner of Liberty and Court streets is going back to its roots.

"Did you know our location was a corner store at one time?" owner Laura Parnell-Cavey wrote on Facebook. "We have all the things you've told us you cannot get in the grocery stores!"

Cool Beans is selling toilet paper at $1 per roll, double-sized loaves of bread for $7, coffee for $5.99 a pound and more necessities at drastically-reduced prices.

Pottery studio All Fired Up on South Court is doing a "drop-in paint studio" where you can pull up to the curb to get an item to paint to then bring back to be fired in All Fired Up's kiln.

Specialty food store Nibble is putting together daily bundles; Wiederhold specifically mentioned one including a mix of Italian breads and olive oils.

"The businesses you ask to sponsor your little league teams and stuff like that, it's time to support them," Wiederhold said. "These local, homegrown businesses support a lot of things in this community and we need to give back to those who have given."

For now, the game plan is to find alternative ways to make it easy for people support local businesses and it's a task Wiederhold and Main Street do not take lightly.

"We're doing the best we can in getting information and sending that out and answering questions," Wiederhold said.