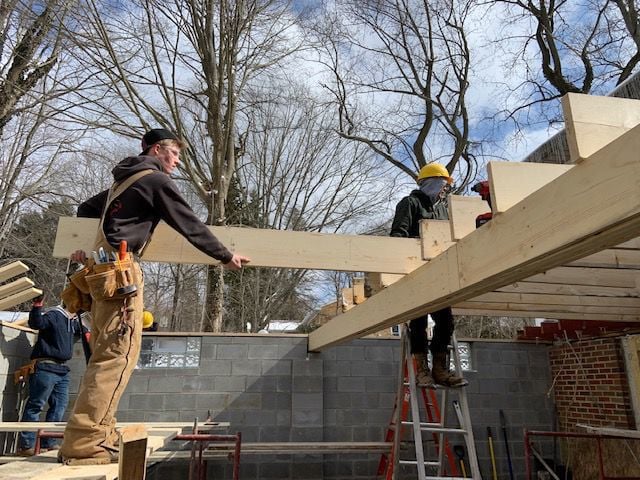 Workers frame in the addition to Emma Pfouts’ house in preparation for her eventual homecoming. 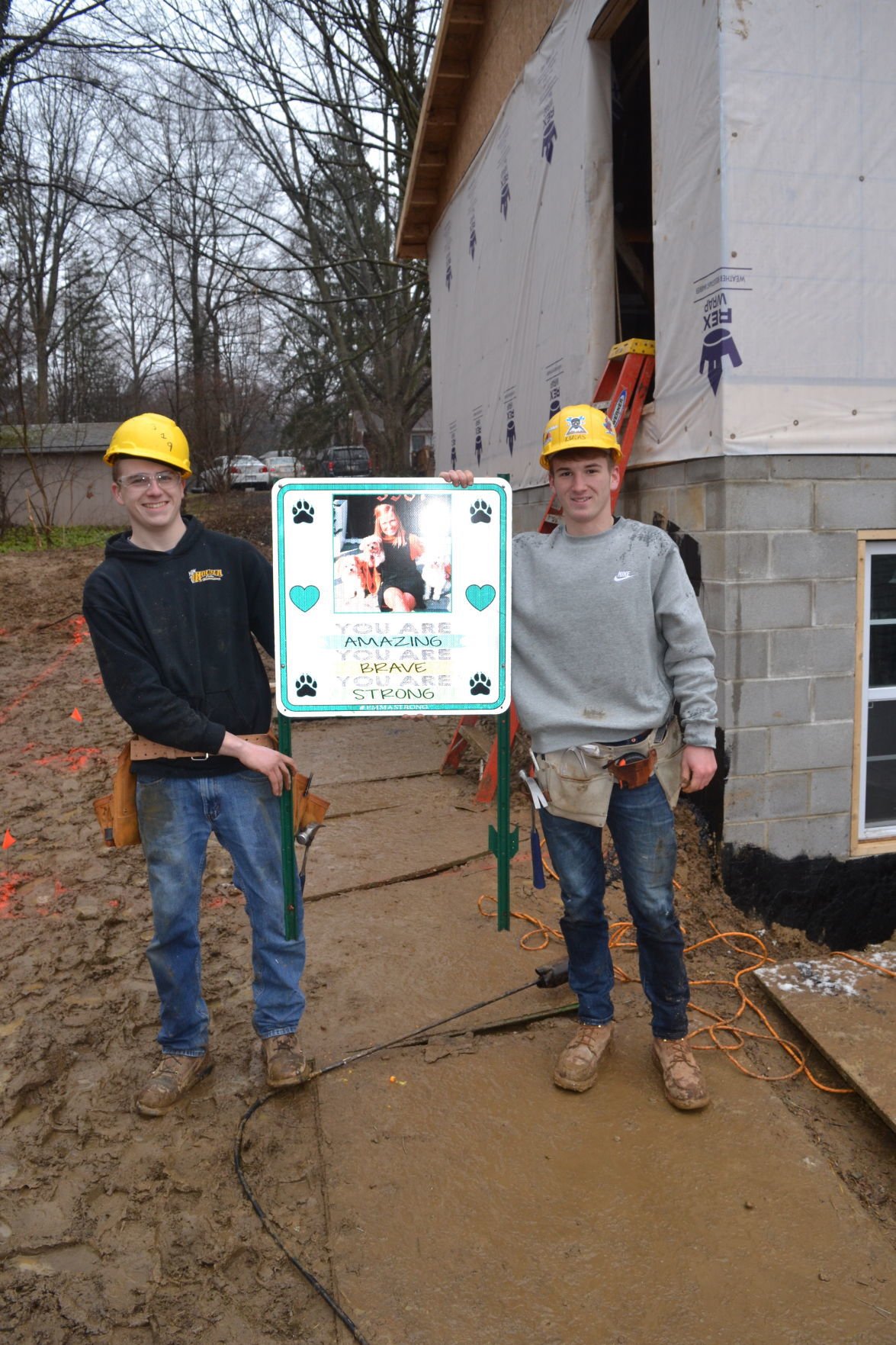 Collin Lucas, right, longtime friend of Emma Pfouts, holds the Emma Strong sign with classmate Mason Neff, of Wadsworth, at the site of their class’s construction of a new addition for Emma.

Workers frame in the addition to Emma Pfouts’ house in preparation for her eventual homecoming.

Collin Lucas, right, longtime friend of Emma Pfouts, holds the Emma Strong sign with classmate Mason Neff, of Wadsworth, at the site of their class’s construction of a new addition for Emma.

NORTON – The Weigand family was facing a double-edged sword.

Their daughter Emma Pfouts, who just turned 16, had defied death and was facing the prospect of coming home. However, her needs after suffering brain damage following a severe asthma attack last fall at the Homecoming dance required extensive modifications to the house they could not afford.

“Emma is in the compact in the Health Science program,” Compact director Roger Wright said. “We were trying to think of ways the compact could help out.”

The compact teaches several building trades programs, including carpentry out of Wadsworth and masonry out of Norton.

“We heard through the grapevine they needed this addition and couldn’t afford it,” carpentry teacher Chris Kallai said. “This started a chain reaction.”

The carpentry program builds a house every year to give the students hands-on experience, Kallai said.

“As it is, it fell at just the right time for us,” Kallai said.

Fred Muffet, a longtime Barberton building contractor who specialized in housing founded Mission U.S.A., a nonprofit alliance of construction workers, to help the recovery from Hurricane Katrina. For several years, the group has focused attention on local needs.

“I read about this, probably with everybody else,” Muffet told The Post. “I learned they were going to need renovations that were more than they could afford. I went out and looked at it and found out it’s a very modern house but we’d have to move a lot of interior walls. It was easier to just build on an addition.”

Because of Emma’s new disabilities, she needs room for a wheelchair and a bathroom with special fixtures. The addition creates a new bedroom for Emma with its own equipped bathroom.

Mission U.S.A. coordinated labor and worked with the compact to make the project happen.

“We had Copley Police out there working,” Muffet said. “We even had the mayor out there with a hammer.”

Mission U.S.A. and the compact were able to get all the materials and labor donated and the mission itself got nothing.

“We’re not charging anything to do this and anything left over will be given to the Weigands,” Muffet said.

Collin Lucas is a Norton student who attends the compact’s carpentry program. He has been working on the addition and he is also a longtime friend of Emma’s.

“We’ve been friends since about fifth grade,” Lucas said. “I really appreciate this a lot. It means a lot to me and the family.”

Kallai said he expected the work to be done in about another week and a half.

The masonry program will build a fire pit off the addition later and the compact’s culinary program has been catering meals for the family and the workers.