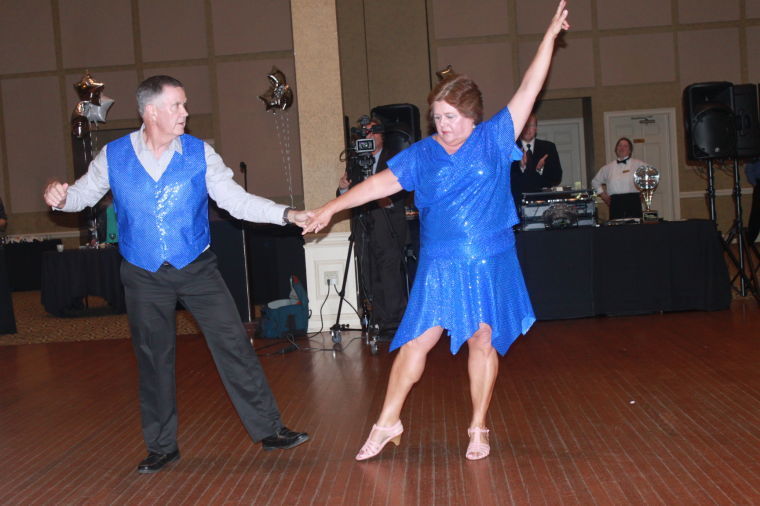 Medina Schools Superintendent Dave Knight and wife Susan were named grand champions of Dancing with the Medina Stars. They danced the hustle to “Silly Love Songs.” 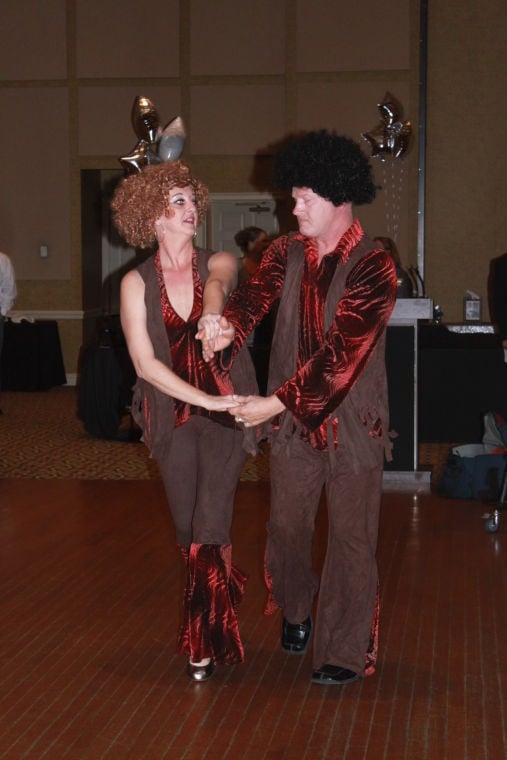 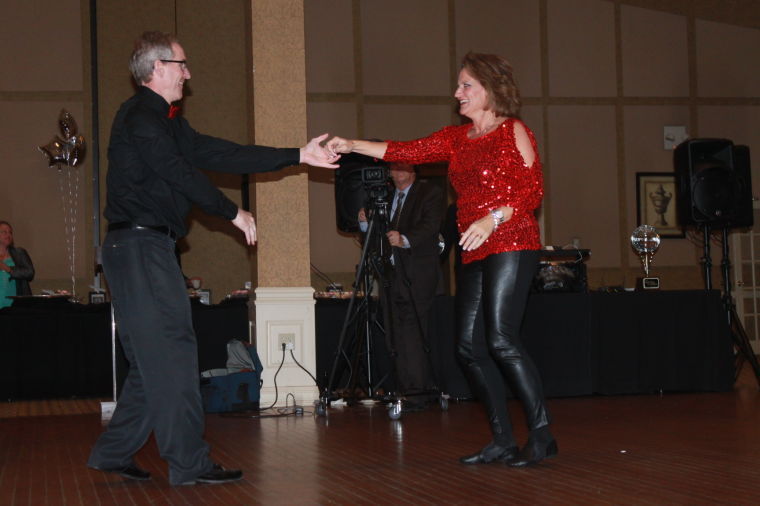 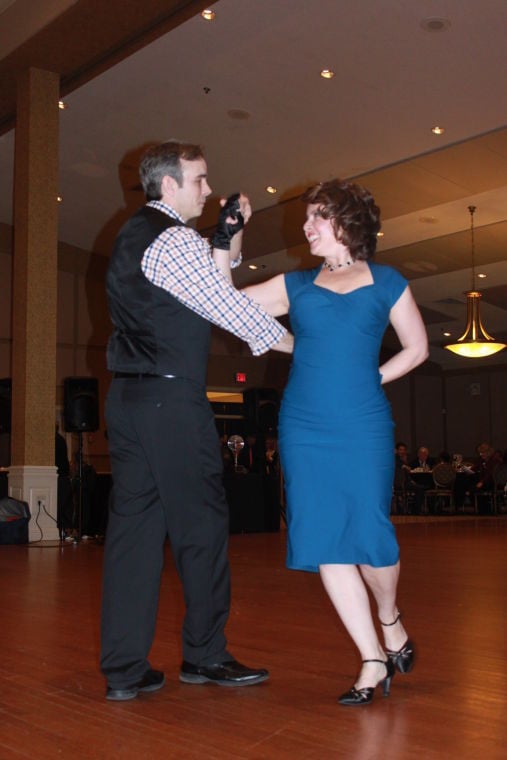 Jamie and Maryann Chandler did the rumba to “Groovin.” The couple just celebrated their 20th anniversary earlier that week. 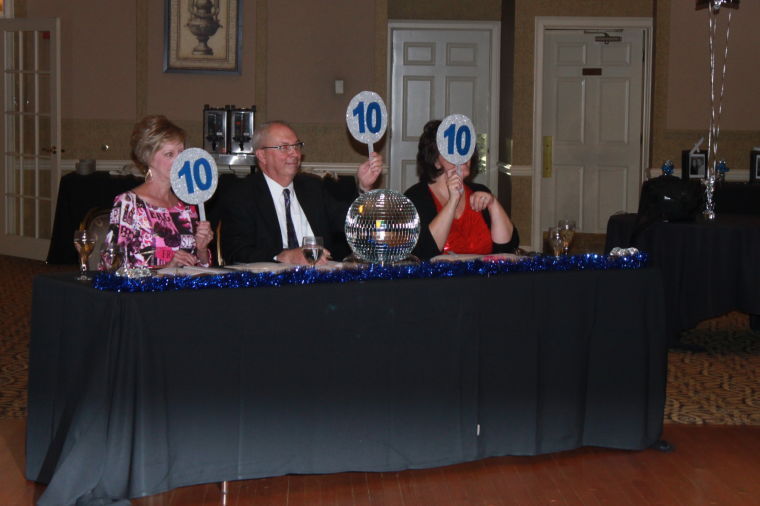 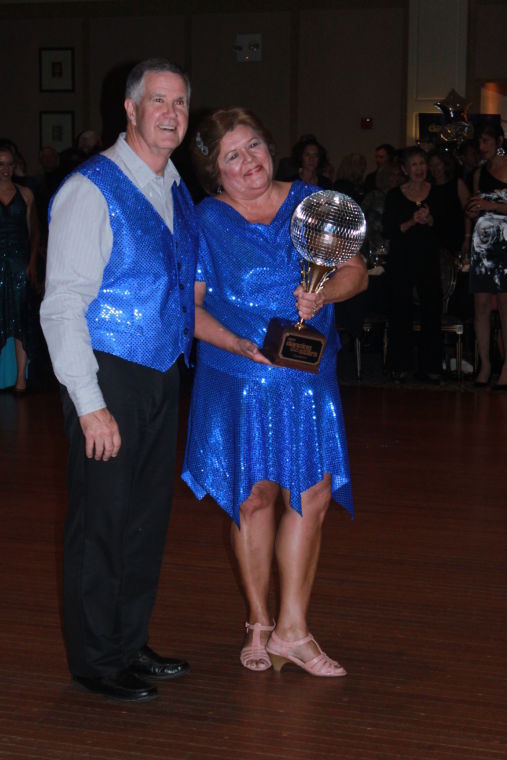 Dave and Sue Knight won the grand championship mirror ball trophy. Their costumes were designed by Sue herself, although a joke was made why they were not Medina green.

Medina Schools Superintendent Dave Knight and wife Susan were named grand champions of Dancing with the Medina Stars. They danced the hustle to “Silly Love Songs.”

Jamie and Maryann Chandler did the rumba to “Groovin.” The couple just celebrated their 20th anniversary earlier that week.

Dave and Sue Knight won the grand championship mirror ball trophy. Their costumes were designed by Sue herself, although a joke was made why they were not Medina green.

MEDINA TOWNSHIP − After long hours of practicing and lessons, the eight couples competing in Dancing with the Medina Stars made their debut on the Weymouth Country Club stage Nov. 7.

The “stars” may not be well known to everyone, but hundreds came out to see their friends, relatives and colleagues perform and raise money. There were eight couples from all over Medina County.

The third annual dance showcase was a fundraiser for Faith in Action Medina County Caregivers, which provides transportation to medical appointments and other services to seniors needing assistance.

There were two winners at this year’s event who received trophies: the grand champions, which was decided by a combination of the judges’ scores and the people’s choice award, which came from attendee and online votes.

Taking grand champion honors were Medina Schools Superintendent Dave Knight and wife Sue, who did the hustle to “Silly Love Songs.” Mike and Kelly Rose Stallard, dressed in afros and bell bottoms, won the people’s choice award dancing the hustle to “Boogie Shoes.” Both couples had large cheering sections and brought props like plastic clappers to show their support.

The six other couples gracing the stage were Ben Cavey and Laura Parnell; Jamie and Maryann Chandler; Devon Duncan and Mike Diello; Chris and Tricia Easton; Mike and Karen Huth; and Bill and Elaine Lamb.

After each dance, the couples heard from the judges and got a ranking out of 10. During both the dinner hour before the show and during intermission, attendees got the chance to buy extra votes, which also included a raffle ticket for baskets.

In the weeks before the event, each couple took dance lessons at Dance D’Elegance and determined which dance and song they would use.

Before their dances, some couples said they wanted to sign up for the competition, while others claim they had to be convinced by others.

Dave Knight claimed his arm “is still sprained” after Cindy Grice, last year’s dance winner and Waite Elementary principal, convinced he and Sue to participate. However, he said the effort is worth it because Faith in Action is a great cause.

Laura Parnell said she volunteered along with Ben Cavey to participate and said taking lessons has been a great way to spend time together. She hopes they will continue with more lessons in the future.

Friends also had the opportunity to vote for the couples online beforehand, with each chance costing $10 each. Around $8,000 was made from online voting alone. The fundraising goal for the event was $30,000, said executive director Deb Poland.

Between dancers and during intermission, attendees heard more about what Faith in Action does and an effort with other local nonprofits who have gathered together to raise funds with the help of the Medina County Community Fund.

Serving as judges and providing commentary after each couple danced were Nancy Likens, Nick Solar and Cindie Schneider.