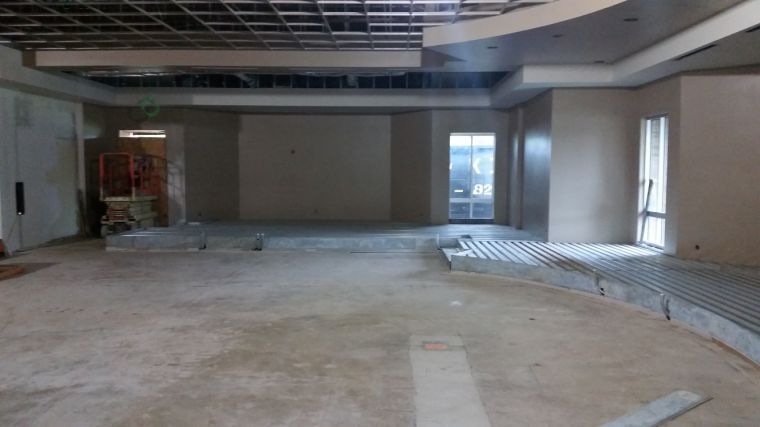 The new council chambers now rests in the area where all the book shelves were located. It’s what library patrons first saw when they walked through the doors and looked straight ahead. 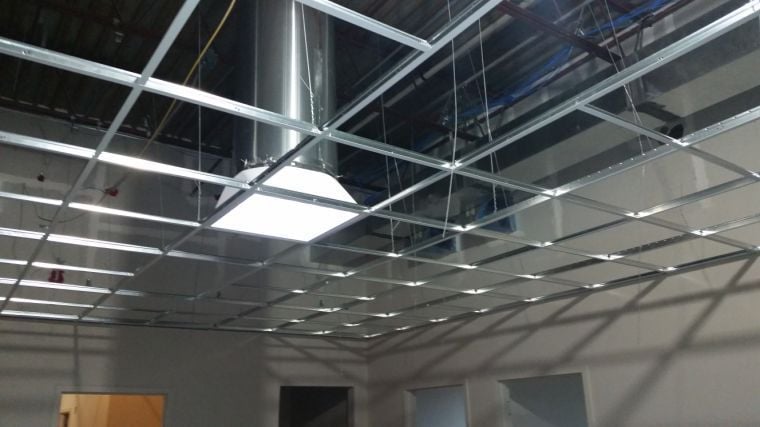 Several of these lenses or skylights have been installed throughout the building to draw sunlight into the middle of the building. 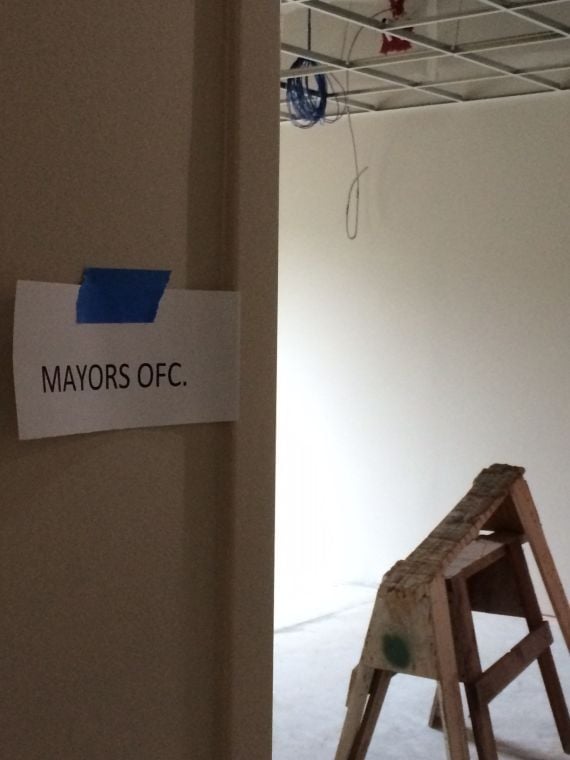 Here’s a little peek into the mayor’s office at the new city hall. 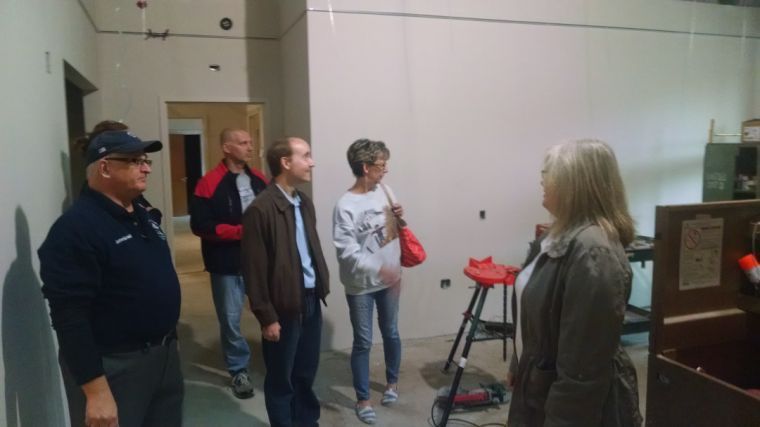 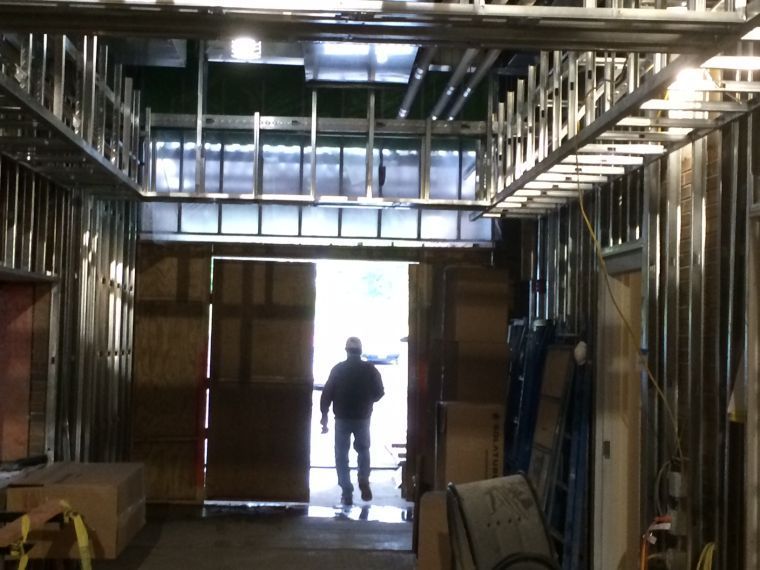 This picture was taken just inside the entrance to the new city hall. It is what was the old library’s foyer that is being refashioned into a more modern, more inviting space.

The new council chambers now rests in the area where all the book shelves were located. It’s what library patrons first saw when they walked through the doors and looked straight ahead.

Several of these lenses or skylights have been installed throughout the building to draw sunlight into the middle of the building.

Here’s a little peek into the mayor’s office at the new city hall.

This picture was taken just inside the entrance to the new city hall. It is what was the old library’s foyer that is being refashioned into a more modern, more inviting space.

NORTH ROYALTON – As Ward 1 Councilman John Nickell toured the new city hall construction zone, he was amazed at what he saw.

“Last time I talked about the project, I was excited. Now that I’ve seen it and walked through it, I’m inspired. This is very cool. It’s remarkable to see how much space is in the building. It won’t be recognizable to people when they walk through the ‘old library’. Looking at the plans on paper and then seeing those plans come to life, it’s just amazing,” he said.

“What stood out to me was how much bigger the new city council chambers will be and how great the overall building will look once everything is completed. The transformation process from the old library into our new, modern city hall is impressive to see firsthand,” he said.

Nickell, Langshaw, Ward 2 Councilman Gary Petrusky and Ward 5 Councilman Steve Muller were all treated to a sneak peek tour of the city hall construction site Sept. 13. Ward 4 Councilman Paul Marnecheck and Ward 6 Councilman Dan Kasaris could not attend due to prior commitments. Council President Larry Antoskiewicz could not be there either, but he tours the site frequently, keeping up to date on the progress.

Despite the fact that it looks like it has quite a ways to go yet, the project is actually fast approaching its completion date and is coming together rather quickly. In fact, it was announced this past week that most of the substantial construction is now anticipated to be completed by Oct. 17. Shortly after that, the move-in date will be set.

A portion of the Information Technology components cannot be installed until the interior is a dust-free site, but the city is still shooting for the end of October, beginning of November to be all moved in. The move will be performed from a Friday evening to a Monday morning so as not to disrupt city business.

Community Development Director Tom Jordan accompanied council on the walk through last weekend. He said one of the aspects he finds particularly striking and a drastic change from the library are the more than 20 skylights or lenses that have been installed throughout the building to utilize natural lighting.

“It’s a really nice feature and is very energy efficient. You get light free of charge, and it makes it more livable too,” Jordan said.

The building is now completely enclosed and all windows have been installed. The rooms are not only taking shape, but paint primer is now up on some of the walls.

Council chambers is taking shape too, which the councilmen were able to get a peek at and snap pictures of. The walls are all up and the dais floor is being installed currently. The audio-visual wiring for the sound and TV system is also being conducted now, Jordan said.

Outside, the flat roof has been completed and the standing seam metal roof that replaces the asphalt around the roof parameter was expected to be installed this past week.

“Once the metal roof goes on , it will make a big difference,” Jordan said.

Not only does the building look good, but the project costs and time management are looking good too. Costs have been managed very well, Jordan said, and the time schedule is on point.

“They still have us getting in there by early November, so we are happy with that,” he said.

A few minor change orders have come up that city council was expected to OK at its Sept. 16 meeting. These changes, which amount to approximately $48,000, pertain primarily to some exterior doors that the city attempted to spare but cannot, additional site work, and the installation of a new recycling and trash receptacle that will jointly serve both the new city hall and Memorial Park.

“The old one at the park looks pretty bad, so we decided to replace it,” Jordan explained.

The fiber optics, which were recently installed along Route 82 from the police station and then down State Road to the new city hall and also down Ridge Road to the office on aging, is now being installed into the individual buildings. It is also being tested to ensure it is functioning properly.

“The office on aging has been installed and was cleared this morning,” Jordan.

The phone systems will then be installed beginning with service, then fire and then the new city hall.

As for moving, the tentative date is Nov. 7, a Friday. City hall staff have already begun marking and organizing items for the move.

Mayor Bob Stefanik said he plans to host an open house for the public on a Saturday shortly after staff settles in at a date to be determined.

“We haven’t planned it yet. We might have pizza and soft drinks,” he smiled.

Jordan said everything is truly coming together, and it’s neat to see. He said he will be most appreciative to have new meeting space for public, council and community meetings that he can be proud of.

“If you are part of an organization in North Royalton, you know there is very limited meeting space. The library is completely booked up for many months. And if you have been to city hall, you know the ADA compliance issues there, the narrow staircase, the peeling wallpaper that’s been taped down. I will be proud to have a public meeting at city hall that provides better access,” he said.

Petrusky said he’s ready to walk through the doors when it’s all completed.

Nickell said he knows without a doubt that after having toured the building that the city made the right choice in renovating the old library into the new city hall.

“After touring the new city hall, I have no doubt it will be more user friendly for the staff and the residents. It’s all on one floor, there are bigger offices, and a bigger council chambers with display technology for when we are having a meeting and need to show maps and documents,” he said. “It’s better than I expected.”