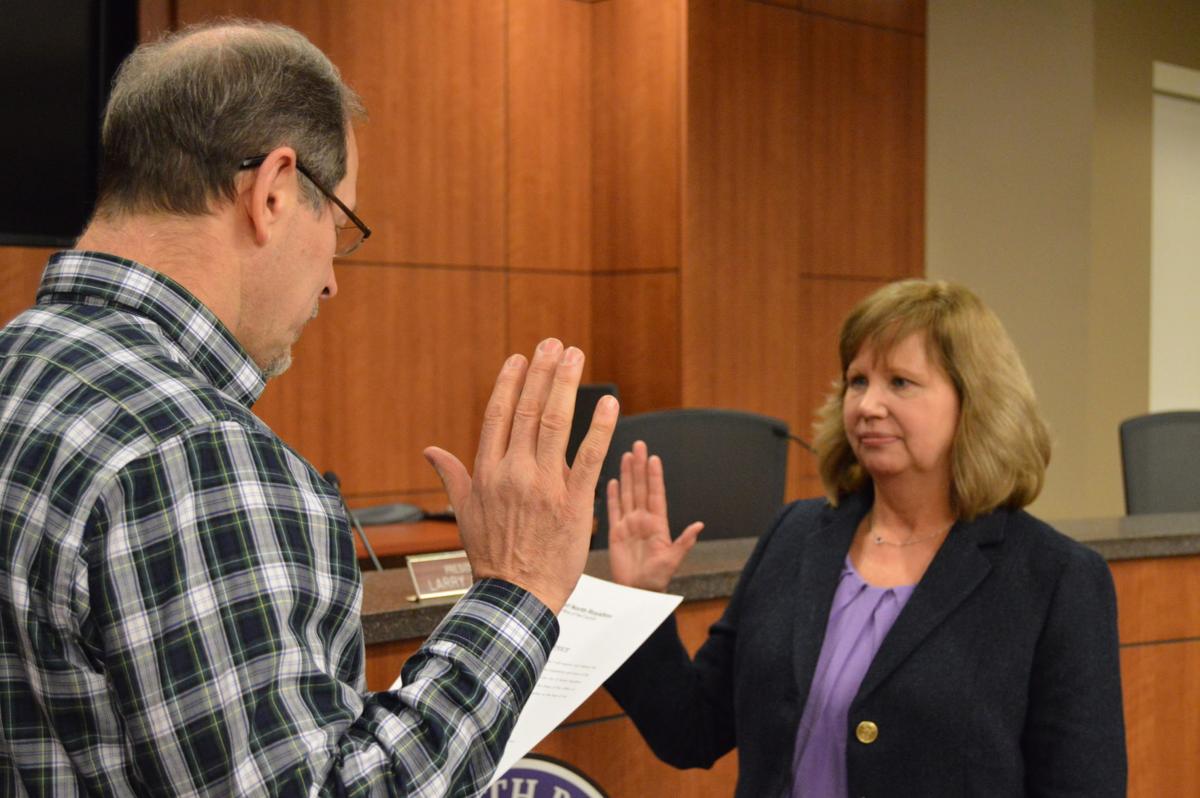 Cheryl Hannan was sworn in as Ward 5 councilwoman by Council President Larry Antoskiewicz after a special meeting Jan. 24 where she was chosen unanimously by council. There hasn’t be a woman on city council in 10 years. 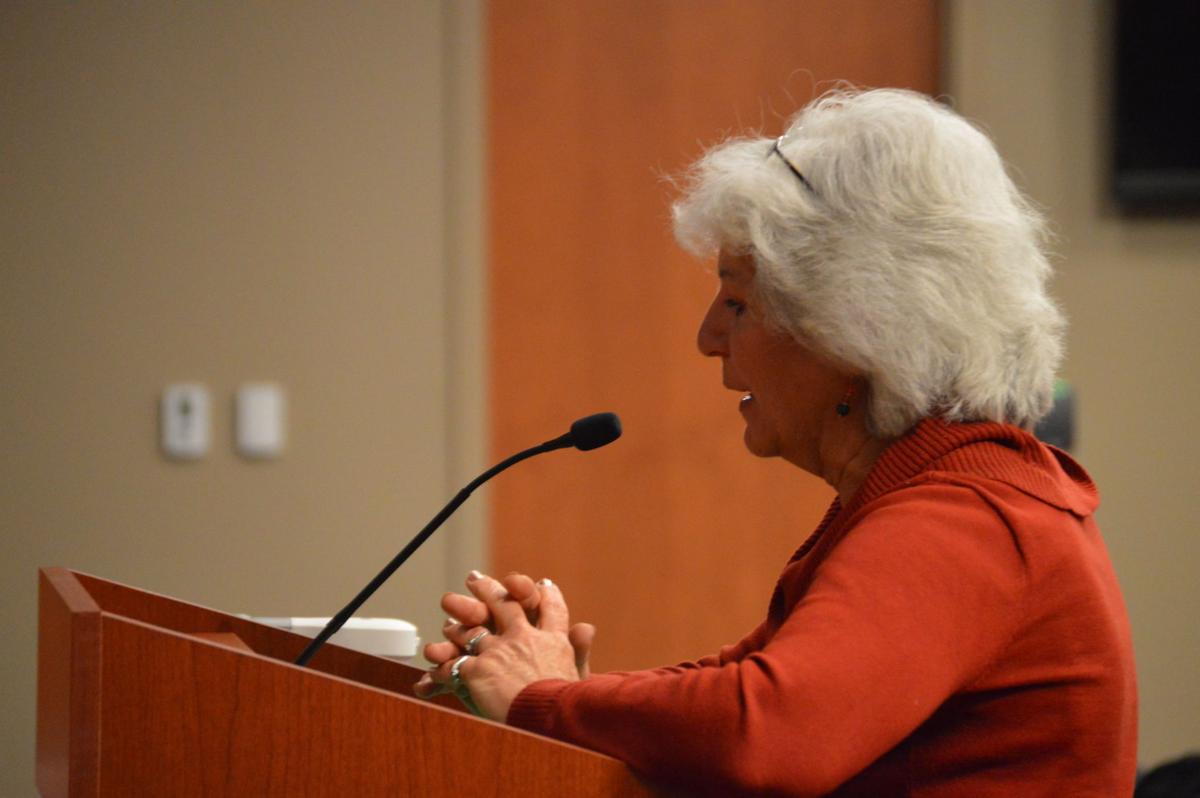 Kathy King answers questions from council about her experience and reason for seeking the vacated Ward 5 seat during a formal interview Jan. 24.

Cheryl Hannan was sworn in as Ward 5 councilwoman by Council President Larry Antoskiewicz after a special meeting Jan. 24 where she was chosen unanimously by council. There hasn’t be a woman on city council in 10 years.

Kathy King answers questions from council about her experience and reason for seeking the vacated Ward 5 seat during a formal interview Jan. 24.

For Ward 3 Councilman Dan Langshaw and Ward 6 Councilman Dan Kasaris, both were strong but the edge came down to Hannan’s current and past involvement.

“Her prior elected office experience, service on the planning commission and the fact she has been coming to city council meetings since the vacancy, made it clear she was prepared to hit the ground running,” Langshaw said.

“Both candidates were awesome, and Ward 5 would have been in good hands with either. However, Cheryl provides the experience, background and knowledge of the city and her ward to best represent the residents,” Kasaris added.

Interview questions ran the gamut: what about each person’s background would compel council; list some issues in Ward 5 and the city; do either plan to run in November; would the county require either to change jobs to serve.

Hannan, 57, served on the school board eight years, on planning commission for five plus years, is a 30-year resident and works as an attorney at the Cuyahoga County Common Pleas Court.

She cited her community and legal experience and passion for public service as compelling reasons to appoint her.

“I think public service is a public trust. I think any one of us is called to step up, and I felt like I had this responsibility and I stepped forward. I felt it when I was asked to be on planning commission, and I feel it now,” she said. “I want North Royalton to continue to be the place where people can raise a family, go to school, work, play and do those things in an area that is welcoming to them.”

Of particular interest to her is the recent rubbish contract, which includes automated recycling; medical marijuana; the drug epidemic.

“I understand the benefits,” she said of medical marijuana. “There’s a list of people that sometimes that’s the only thing that helps them, but yet a community has to weigh what they want in their borders.”

As for the drug epidemic, it’s something she’s all too familiar with working at the court.

“It strains services, safety, our police officers. It wreaks lives, harms neighborhoods and can create crime,” she said.

Hannan mentioned the development at Bennett’s Corner and safety when it came to Ward 5 issues.

“The development at West 130th and Boston, people are concerned … people don’t want to have a business in their backyard. Turnpike noise is not so much a concern. It’s my understanding they’re going to put sound walls up this year. Water is not so much a concern because this current administration and the mayor did a lot work to clean those basins and creeks and streams. Safety, people want to be safe,” she said.

Hannan will run come November. All six ward seats are up for election this year.

Neither she nor King would have had to change day jobs to serve. County employees are permitted to run in nonpartisan races. County prosecutor office employees are prohibited, a rule enacted by former Prosecutor Tim McGinty in 2013.

King, 57, works in the Cuyahoga County Department of Seniors and Adult Services as a case manager.

She shared about her love for North Royalton, her outgoing personality and passion for service.

“I love North Royalton. I’ve always went for the underdog and been tenderhearted. I just always have felt I got more back when I give. I have people skills ... That’s what someone needs to have to sit on council. That volunteer thread has always been there too,” King, who has served as an American Red Cross Disaster Services volunteer, said.

The drug epidemic, having ample housing options for seniors and the number of recent break-ins are of particular interest to her.

“Service forces are wonderful. But there are a lot more break ins. That’s something that concerns me. People need to be wiser, and neighbors need to watch out for one another,” she said.

As far as issues specific to Ward 5, deer culling, which King is for; a leash-free dog park; and flooding topped her list.

She listed her determination, fairness, levelheadedness and her approachable nature as reasons to select her.

“I do have a lot to give. I have been on both sides, which is good. I can offer empathy, being able to say, ‘sorry you’re having an issue, but the rules are …’ I have experience, a master’s in public administration. I try to be fair, broad minded and an easy listener. I’m not afraid to ask questions,” she said.

King planned to run if appointed, but now her plans are uncertain.

“Maybe,” she said after the meeting. “Cheryl is very qualified. We’ll see.”