You have permission to edit this article.
Edit
Home Delivery
Digital Editions
Goal Post
Classifieds
Submissions
Other Editions
1 of 3 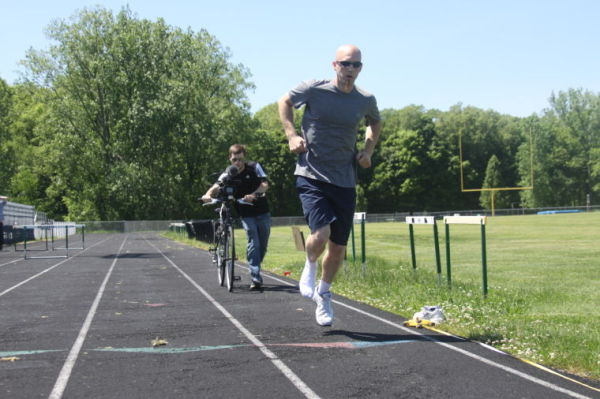 Peter Nestler broke the Guinness World Record for going the fastest mile while hopping on one foot by almost five minutes May 29. 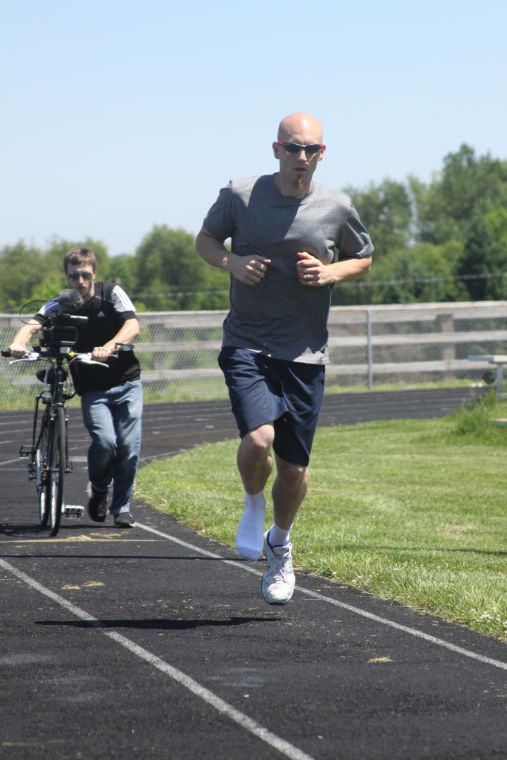 Going the fastest mile while hopping on one foot is the second Guinness World Record Peter Nestler has broken at the Highland track. The first was going 100 meters on one foot the fastest while jumping rope. 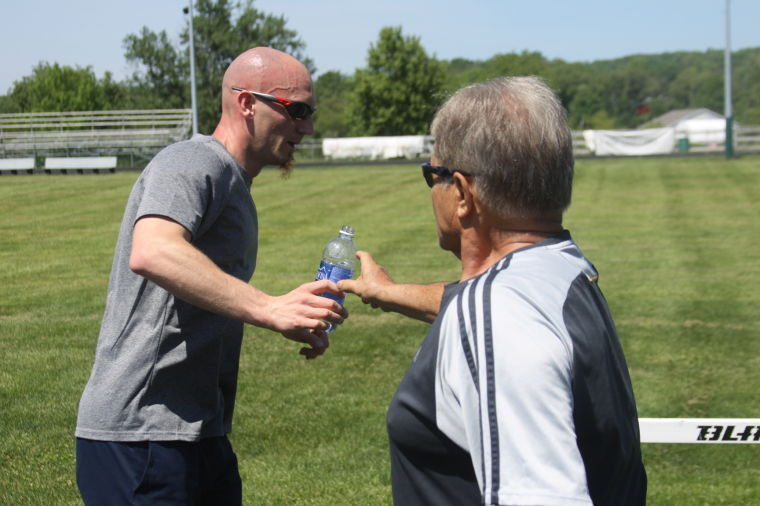 Nestler was allowed to stop to rest and drink water during his attempt as long as his non-hopping foot never touched the ground.

Peter Nestler broke the Guinness World Record for going the fastest mile while hopping on one foot by almost five minutes May 29.

Going the fastest mile while hopping on one foot is the second Guinness World Record Peter Nestler has broken at the Highland track. The first was going 100 meters on one foot the fastest while jumping rope.

Nestler was allowed to stop to rest and drink water during his attempt as long as his non-hopping foot never touched the ground.

GRANGER – There are lots of perfectly valid reasons you might hop on one foot.

Maybe you’re involved in a high-stress hopscotch match. Maybe “Simon” made his demands and you followed them with pride. Maybe you stepped in goo. But it’s pretty rare that you might be making an attempt at a world record.

Peter Nestler, an Oklahoma native, came to the Highland track May 29 to have a go at his seventh Guinness World Record: completing the fastest mile while hopping on one foot. The professional jump roper and motivational speaker shattered the previous record of 23 minutes and 15 seconds set in June 2012 by finishing his final lap at just under 18 minutes and 25 seconds.

According to Guinness rules, in order for the attempt to count the hopper must stay on one leg for the entire duration of the attempt. Nestler could not ever touch the other foot to the ground, although he was allowed to stop to rest whenever he wanted while the clock was ticking.

“I think the biggest challenge you run into with this record is that your leg just seizes up, because you have no actual rest period for the leg at all,” he said. “I initially started by just jumping rope on one foot. I got up to being able to do 16 minutes jumping on one foot, then I started working on doing distance with it. The very first time I tried it I barely got like half a lap, so like an eighth of a mile, before my leg just decided ‘I’m done,’ and I just stopped and was like, ‘alright, this is going to be really hard.’”

He added although he knew he was physically capable of hopping the mile, he couldn’t have succeeded without great willpower and setting goals along the way – a concept he always tries to teach kids when he’s speaking at schools around the country.

“I’ve had to really train my hips to be able to handle the pressure of doing this, because when you first start doing this it really kills the hips, just because it’s an awkward stance to be in,” he said. “It took quite a few months of just training and doing it over and over and over again, gradually building up the distance. Even though I can do the distance now, I’ll get almost three-quarters of the first lap OK, but then it’s just pure misery. No matter how much I train, it’s just awful.”

Nestler decided to come to Highland to break this record because his former jump rope coach, Bob Berry, is the assistant high school track coach and cross country coach for the middle school. Berry retired as a sixth-grade teacher two years ago and prior to that taught physical education in Juneau, Alaska.

Berry taught Nestler, who grew up in Alaska, from kindergarten through fifth grade and coached the Juneau Jumpers jump rope team, which took home seven world championships while Nestler was on the team.

Nestler said he’s actually completed six other Guinness World Records – four which are officially recognized by Guinness and two which still need paper work filed. One of these records, going 100 meters on one foot the fastest while jumping rope, was also completed at the Highland Middle School track.

Another record he said he plans on submitting to Guinness soon is hopping on one foot on a treadmill at 6.5 km/h (about 4 mph) for the longest time period.

“With that one I was training for the mile and I was up to six-and-a-half to seven minutes on the treadmill. Well, the world record’s four minutes, so I was already beating it and I figured, ‘well, let’s do this one too,’” he said. “Then I’m sort of training to do the most jumps underwater for an hour. I’m still trying to figure out how it’s all going to work correctly.”

Nestler said it can take approximately 12 weeks for Guinness officials to approve the record after they receive the footage.

He said the reason he continues to push himself to break new records is two-fold.

“Part of it is related to I wanted to kind of give myself a challenge with workouts. After jumping for 28 years … the training stuff was getting kind of redundant, so the record idea was a good way for me to work out while I’m training, especially because a lot of them are kind of quirky,” he said. “The other side of it is from the motivational side, because I do speak in schools all over the country. Every single one of these records, it’s not like I just walk out and do it. There’s two, three, four months of training for every record, and I kind of discuss with the kids what it takes to set these records.”

Hopping into the record books