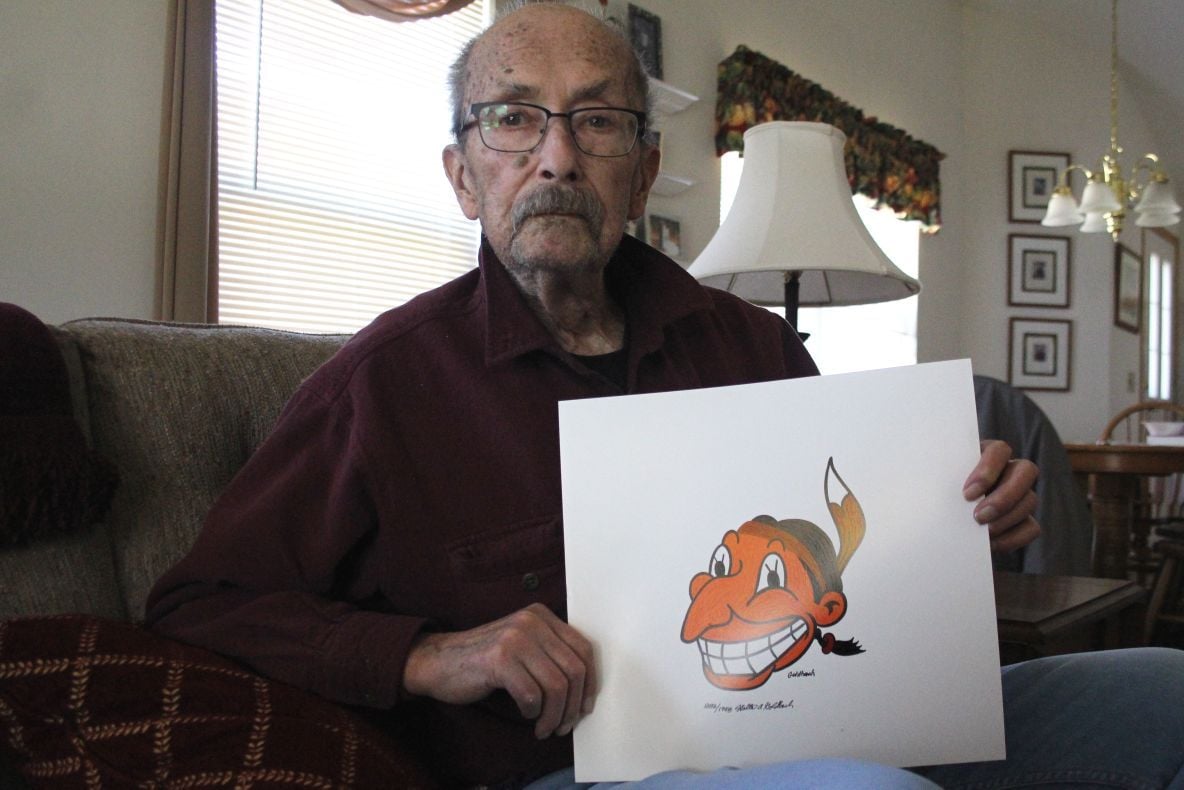 Medina Township resident Walter Goldbach, 87, holds a lithograph of the Cleveland Indians’ Chief Wahoo logo he created in 1946 at the age of 17. 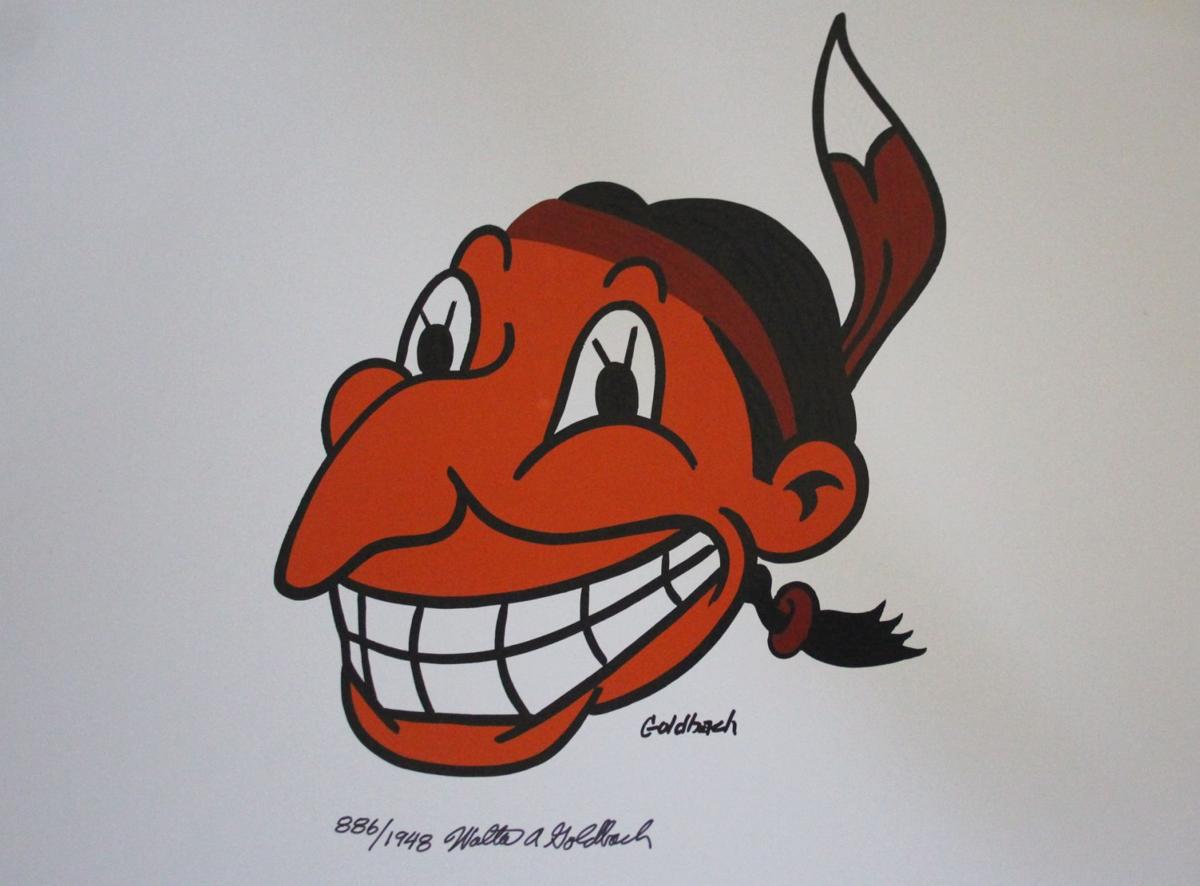 Walter Goldbach’s original Chief Wahoo came to fruition when then Cleveland Indians owner Bill Veeck walked into his family’s shop inquiring about a caricature of a Native American for his team logo.

Medina Township resident Walter Goldbach, 87, holds a lithograph of the Cleveland Indians’ Chief Wahoo logo he created in 1946 at the age of 17.

Walter Goldbach’s original Chief Wahoo came to fruition when then Cleveland Indians owner Bill Veeck walked into his family’s shop inquiring about a caricature of a Native American for his team logo.

Despite never being paid for creating the original rendition of what is now one of the most-talked-about and recognizable team logos in pro sports, Goldbach, 87, still doesn’t agree with the Indians’ recent decision to demote Chief Wahoo, the team’s Native American caricature, from primary logo in place of the block “C.”

A scathing April 5 L.A. Times editorial called for complete removal of the “racist” Chief. Protests by a number of Native Americans and others against the symbol, which is still featured on the Indians’ uniform sleeves, have taken place outside of Progressive Field on the Tribe’s opening day for over 25 years.

What Goldbach finds annoying, though, is how the protests seem to dissipate once news reporters do – that and how politically correct society has seemingly become.

“I think they changed it because they hoped it would cause less of a fury,” Goldbach said of the his original Wahoo design, which was replaced by the current version prior to the 1951 season. “What you see now is more offensive, but everything you say and do, even using the wrong word, you have to change it. You see it all the time.”

“If they think putting a ‘C’ on a new helmet will ease the tension, that’s up to them.”

Goldbach was 17 in 1946 when then Indians owner Bill Veeck walked into his family’s west side emblem and badge shop specifically requesting a caricature of a Native American. Goldbach admitted he found the concept somewhat difficult.

Having “free rein” in the art department of J.F. Novak Co., which primarily manufactured chevrons and patches for police and military uniforms, the job fell into the lap of “Wally,” as he was then known. He used oil paints to create four drafts to present to Veeck.

Goldbach’s orange-skinned version was only used 1947-1950 – the Indians were world champs in 1948 and have not won a title since – until Veeck sold the team and tenure began for the current red-faced, even more-cartoonish Wahoo. The logos before Goldbach’s, dating back to 1928, were variations of a Native American in a feather headdress.

Goldbach, however, on top of never being paid by the Indians, did not receive any sort of licensing rights from Major League Baseball until the 1990s. That licensing allowed him, in addition to speak on the subject for profit, to reproduce and sell Major League Baseball-branded lithographs and commemorative baseball cards reflecting the design.

“They didn’t pay me anything, but I guess they thought me being involved with them was compensation enough,” Goldbach said. “I always wondered why we couldn’t have been closer together.”

There were a number of times in the ‘90s when Goldbach was invited by the Indians to give Wahoo history presentations to diehard fans at the hotel where the players stayed during spring training in Winter Haven, Fla.

A diehard himself, Goldbach and his wife Barbara even had a home in Winter Haven for 15 years and were regular attendees of Indians pre-season activities. He became friends with multiple players like Tribe Hall of Fame inductee and shortstop Omar Vizquel – he said pitcher Orel Hershiser used to call Barbara “Ma” – but that was about the extent of his relationship with the organization.

Even pushing 90 and having no real ties to the Indians, Goldbach still can’t avoid controversy surrounding the often-debated Chief Wahoo logo he created during his days playing baseball at James Ford Rhodes High School in Cleveland.

“There’s a funny thing that happened about three months ago,” Goldbach said. “My boy (Michael), who is president of the Rocky River Masonic association, says, ‘Dad, we’ve got a bunch of old guys down here, as old as you, and I’d like you to come talk.’”

Goldbach – who planned to give the same Chief Wahoo anecdotes he had been asked to give to groups countless times over the years – arrived at the Lake Road lodge to a crowd of about 100.

“I thought, what’s gonna happen here? I later asked him, ‘How did you find out about this get together?’ He said, ‘We find out about everything that has anything to do with this,’” Goldbach said. “Deep down in my heart, I have nothing against American Indians ... but I’m 87 years old. I’m not in a mood to get involved.”

Goldbach maintains Chief Wahoo serves the Indians far better than the block “C” due to its recognizability and uniqueness.

“I’ll walk into a restaurant anywhere in the United States with my Chief Wahoo cap on and someone will say, ‘Oh, are you from Cleveland?’ and we start up a conversation,” he said. “What’s happening with the ‘C’ on the hat, it could be Charleston, it could be Cincinnati, it could be Chattanooga, it could be a kids’ baseball team. No one’s gonna talk to you about that.”

Goldbach has lived in Medina Township for the last 15 years. He and his wife moved from Cleveland to Hinckley following his service in the Korean War. His five children graduated from the Highland district and he is a grandfather of eight and great-grandfather of three.