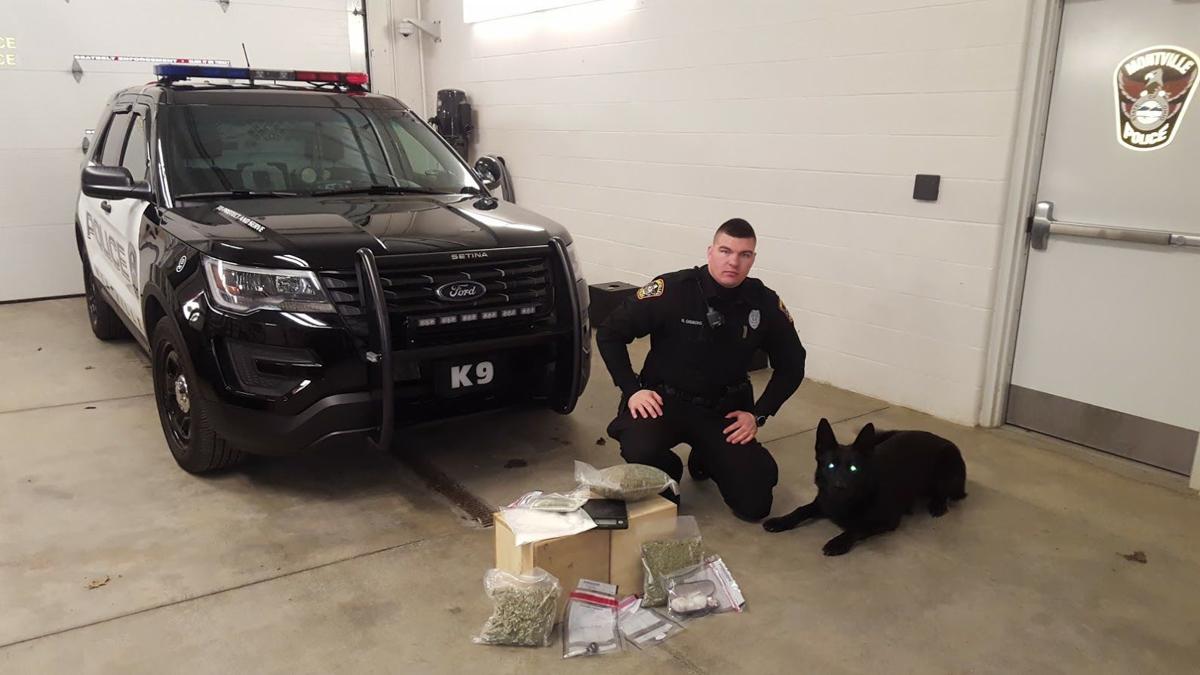 Montville Police Officer Ryan Gibbons and his K-9 partner, Blek, pose with drugs and paraphernalia from a recent seizure. 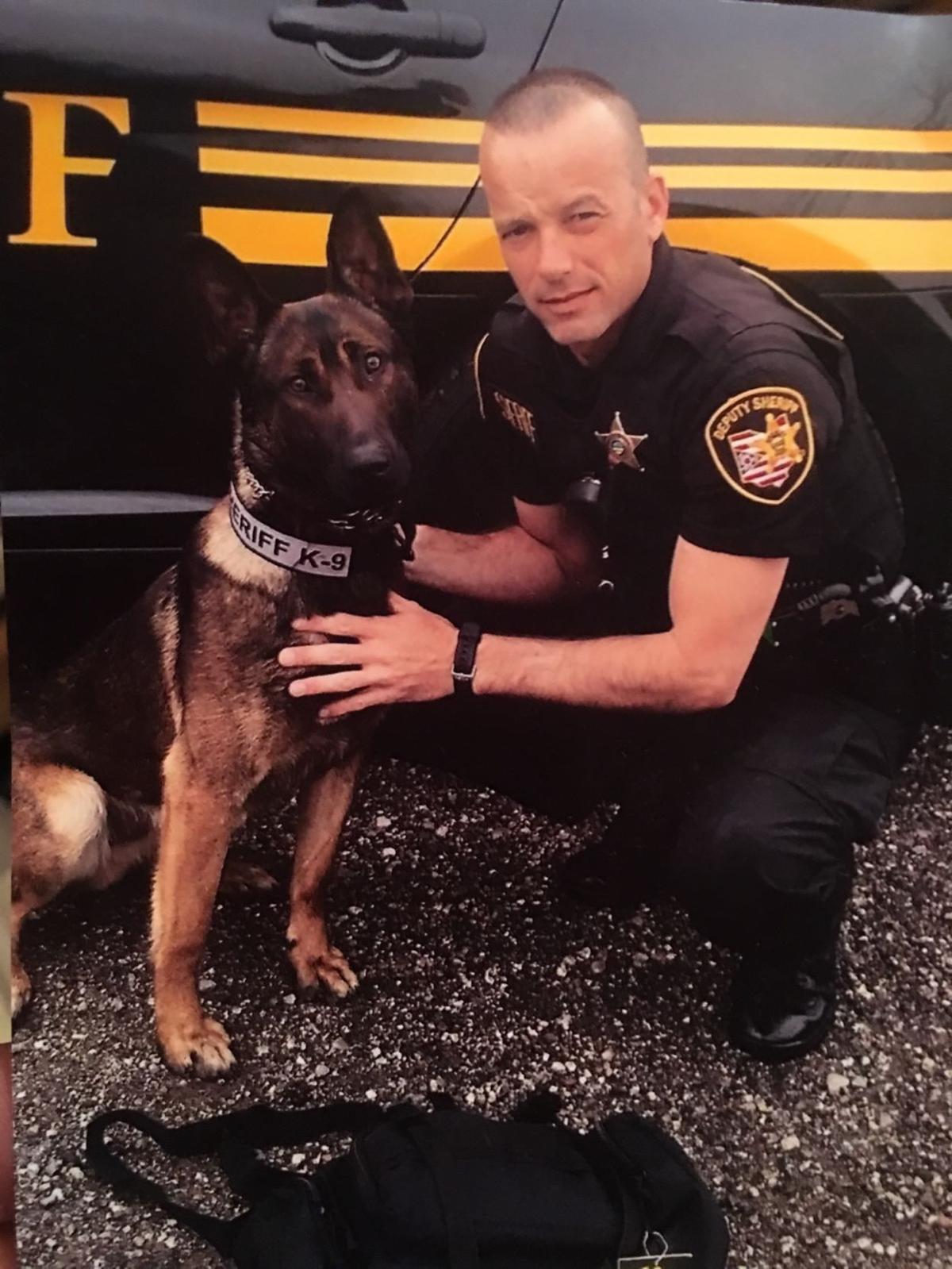 Montville Police Officer Ryan Gibbons and his K-9 partner, Blek, pose with drugs and paraphernalia from a recent seizure.

MEDINA COUNTY – Heroin is not only dangerous to humans, dogs can also overdose, which is a major concern of law enforcement as officers utilize their K-9 partners to detect narcotics, not only in cars but in houses, hotel rooms, airports, etc.

Mindful of the fact that there were 260 heroin overdoses in Medina County in 2016, which resulted in 34 deaths, Medina County Sheriff’s Office Deputy Dave King and his K-9 partner, Rocky, and Montville Police Officer Ryan Gibbons and his K-9 partner, Blek, as part of the department’s criminal patrol, travel the roads in the county searching for suspicious vehicles that may contain illegal drugs, along with responding to tips.

“We must have a legitimate reason to pull a vehicle over, such as speeding, not using a turn signal to change lanes, tail light out, or erratic driving, to name a few,” said King.

King said conversation with the driver can sometimes lead to suspicion that there are narcotics in the vehicle. Enter the K-9 officer, who can smell the presence of heroin and other illegal drugs from outside the vehicle. If the dog alerts by either sitting or barking, per its training, the officer then searches the car.

“We look in areas inside the vehicle where no one would expect us to look,” said King. “We can take all the time we need to do a thorough search.”

Gibbons added, “Part of our job is to spot any hazards such as broken glass, needles and any narcotics.

“Because there is so much heroin out there and there could be an open container or heroin residue inside the vehicle with which the dog could come in contact, we try to keep the dogs out of cars.”

Both officers, who are assigned to the Medina County Drug Task Force and the Medina County Strategical Weapons Attack Team (SWAT), said that all narcotics are dangerous, but marijuana is one of the worst, as it develops mold spores when wet, and when inhaled by a dog or a human, will enter the lungs, grow bigger and cause long-term effects, such as breathing issues or even cancer.

Gibbons said that heroin, a highly addictive and rapidly acting opiate, a drug that is derived from opium, has as an immediate effect on the dog as it does on humans; the respiratory system shuts down, causing death if not addressed immediately.

“We carry extra doses of Narcan for that specific purpose,” Gibbons said.

Gibbons said while meth is considered an “upper,” making a person fidgety and extra active, heroin is a “downer,” causing grogginess and slowed breathing. In all instances of drug exposure, including contact with meth or cocaine, the dog would be rushed to the veterinary or, if after hours, taken to Metro Animal Hospital in Copley.

Dr. Steven Faust of Sharon Center Veterinary Hospital, who is the K-9 physician for both the sheriff’s office and Montville police, said to date he has not had to treat a dog for drug overdose. He said if the dog shows any signs of having ingested heroin, or of having been exposed to it, Narcan is the best treatment.

If the officer has already administered a dose, more may have to be used if the drug lasts longer in the animal’s system. Signs of exposure are panting, dysphoria, (disquiet, restlessness), respiratory depression and, in very severe cases, a coma.

He said cocaine is not an opioid like heroin and is not treated the same way. However, signs of cocaine exposure are similar to those of heroin, but could also include seizures, for which the dog would be given an anti-seizure medication. If the dog has eaten cocaine, it would be given a vomit-inducing medication.

“Figuring all this out is a lot more complicated that one would think,” Faust said.

He said the “general-trained” dogs in law enforcement agencies are more susceptible to drug exposure than the “drug-trained” dogs, as they are taught to alert if they detect drugs.

Gibbons said the mixing of narcotics by drug dealers is prevalent. Combining heroin with crystal meth, or lacing heroin with fentanyl, unbeknownst to heroin users, is more dangerous than heroin alone.

“This is stealing from one’s own family; the drug habit increases retail theft, which drives the price of goods up; children are often being displaced, and foster parents will be in shorter supply,” King said.

He said opiate abuse is the leading cause of death in people under age 45.

As 1-year olds who have already been taught basic commands, K-9s go through six weeks of rigorous training in narcotics, where they are taught to alert when they detect heroin, cocaine, marijuana, methamphetamines or crack cocaine. They are also taught tracking, aggression, to bite on command and release on command, in addition to doing building and area searches.

Repeated tests after the training ensure the dog will only alert to narcotics. Both handler and dog must continue their ongoing education every other week for a total of 16 hours a month. Also, the pair must take an annual state test that covers every aspect of the training. It should be noted that the dog lives with the officer, who is its handler, and his family and, when off-duty, is a beloved family pet.

In addition to the above-mentioned law enforcement agencies, Wadsworth, Brunswick and Lodi police departments each have one drug dog and the sheriff’s office has a second K-9 officer.

Alcoholism was rampant in parts of the United States in the early 1800s and opium was used to help combat it. As a result, opium addiction became a major problem by the 1850s.

The “solution” was to provide opium addicts with a less-potent and supposedly “non-addictive” substitute – morphine. Its use led to a bigger problem than opium addiction. So, heroin, another allegedly non-addictive substitute, was offered in 1898.

It was also marketed as a treatment for tuberculosis. It proved to be more addictive than morphine. Another “non-addictive” substitute, now known as methadone, was developed in 1937 by German scientists searching for a surgical painkiller. It was exported to the United States in 1947 and was even more addictive than heroin.

The “Timeline of American History with Heroin” states that humans have cultivated the opium poppy and used the resin from its flowers as a medicinal and recreational drug for at least 5,500 years in what is today known as Iraq. Afghanistan is purported to be the world’s largest illicit opium producer.

Several sources state that today’s opioid crisis in the U.S. began with over-prescription of powerful opioid pain relievers in the 1990s, which led to their becoming the most prescribed class of medications in the United States and probably a driving factor in the huge increase of opioid overdose deaths.