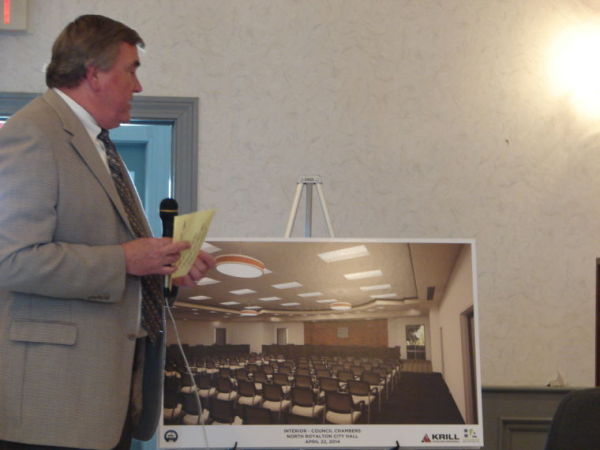 John Van Auker, of Hasenstab Inc. which is Krill’s architect, granted council a peek inside the new city hall’s council chambers with this very crisp rendering. 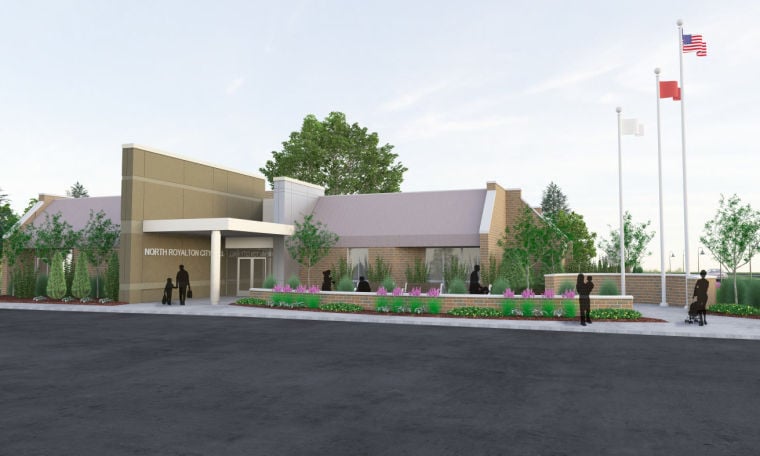 This is what the new city hall, the former State Road library, will look like. It was presented to council at a special building and building codes committee meeting April 22. 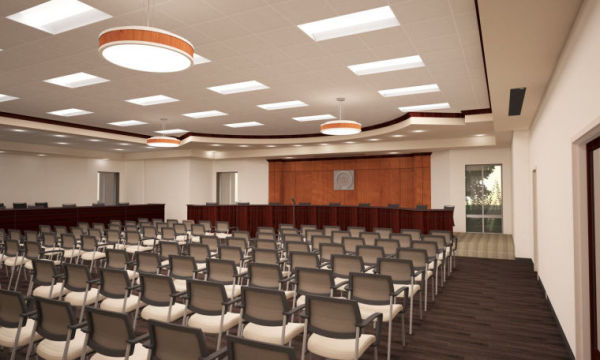 Here is a rendering of what the new city council chambers will look like once the old library/city hall conversion project is complete.

John Van Auker, of Hasenstab Inc. which is Krill’s architect, granted council a peek inside the new city hall’s council chambers with this very crisp rendering.

This is what the new city hall, the former State Road library, will look like. It was presented to council at a special building and building codes committee meeting April 22.

Here is a rendering of what the new city council chambers will look like once the old library/city hall conversion project is complete.

Councilmen lent their final blessing to the project’s price and design allowing Krill to continue forward and start construction next month.

The gross maximum price, the absolute most the project would cost, was estimated at $3 million a few months ago. Krill has spent the past few weeks firming up those numbers and presented the final cost for the project, the guaranteed maximum price.

It is no longer an estimate but is the solid, actual total of renovations.

A contingency of $80,261 has been built in for any unforeseens, but the project is not to exceed the $2.8 million price tag. There will be no costly, surprising change orders like a traditional project.

If anything, the costs could come in lower as this is a design-build project in which there is an added incentive for the contractor to save money on individual components of the project. Any cost savings will be split between the city and Krill.

Ward 6 Councilman Dan Kasaris, building and building codes vice chair, asked what brought the price down from $3 million to $2.8 million.

Kevin Konczos, project manager for Krill, said a big chunk of that was changing the four-pipe HVAC to a standard roof-top system. Revisions were also made to the windows and roof that lowered price.

The bulk of the project cost is creating walls and doors where there are none.

“The library was pretty open so what you see is a more subdivided space then what it was,” Tom Jordan, the city’s community development director, said during the meeting.

Construction is expected to start in June and finish by Oct. 17. City hall won’t be fully ready to receive the public until the end of the year, however.

Councilmen are very satisfied with the price and view the renovation as a huge opportunity and cost savings given the need to update the current Ridge Road location which is deteriorating and does not comply with ADA requirements.

Just to bring it up to code would cost more than $1 million. Some have estimated that outfitting it with what the old library site will house would cost double the library-conversion project. A new building from scratch is much more expensive, costing upwards of $10 million.

Ward 1 Councilman John Nickell, who chairs building and building codes, said the new city hall and the old site will be like night and day.

“The presentation was good, the price came in a little under than what was estimated and the pictures of some of the designs show that this will be very nice for the community. It’s definitely going to be an upgrade from what we have now. There’s almost no comparison,” he said.

Ward 4 Councilman Paul Marnecheck said the city is getting the best bang for its buck.

“And, we’re using a process that sets a firm ceiling to the cost and encourages the design builder to hold tight to that figure. We’re not going to be subjected to change orders and other uncertainties,” he said.

As for the design, he’s satisfied with that too. The council chambers is being configured with better seating, council’s towering dais will be lowered and the technology will be significantly upgraded with improved sound and audio visual components so that both those in the audience and council can see presentations on overhead screens. Audio visual is nonexistent now.

Gas lines are being added to this all electric structure as well as energy efficient components, such as motion-detecting light switches, that will help reduce energy bills.

At Marnecheck’s request, John Van Auker, of Hasenstab Inc. which is Krill’s architect, is going to put the energy savings to paper for council.

“I’m not an interior decorator, but I think the building is doing exactly what it needs to do. I don’t think anyone will accuse us of being opulent,” Marnecheck said. “And it’s not going to be a garrison or fort like some individuals may have thought we were building. It will be very welcoming for the public.”

And with the positive Moody’s bond rating it recently earned, the city will be rewarded with a better interest rate.

“Right now, North Royalton has a great credit score, so we’ll be able to get a cheap loan,” Marnecheck pointed out.

As for the interior, Ward 3 Councilman Dan Langshaw said he thought it would be fitting for North Royalton’s rich heritage to be incorporated into city hall décor and artwork.

“It will be great to have whether it is old historic photos, paintings or mementos from the community to give it a special touch,” he said.

Kasaris said this will be an enhancement that, when coupled with the upgrades that are being done at Memorial Park, residents can be proud of.

“I’m looking forward to walking through it,” he said.

Enhancements for Memorial Park are still being discussed. The playground will be replaced with a modern jungle gym that will be moved closer to the parking lot at a cost of about $150,000 and the park restrooms are being renovated for $46,180.

“I am very happy with how fiscally conservative the overall price tag is. I think going with the design build process was extremely smart because it helped address any potential issues right from the start,” he said. “I am eager to see construction start.”

Like Kasaris, Council President Larry Antoskiewicz, a member of building and building codes, said it’s definitely something residents can be proud of.

“I think people will be pleased with what they see.”