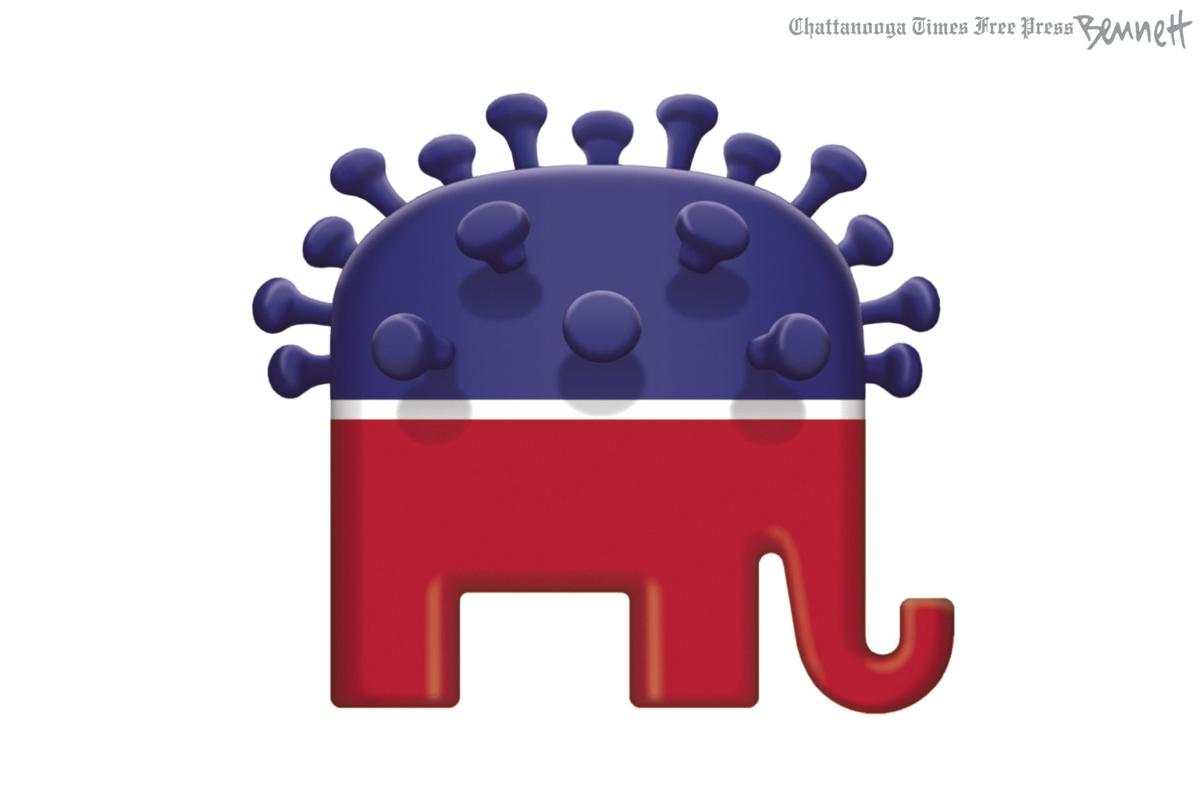 Today, our Opinion section talks about the presidential election from several different angles. The Democrats are trying hard to not get complacent as they have this one almost in the bag. But it is still a long way to November.

I am once again offering up my own opinion on the race. We have included a cartoon to show my point because as I always say, a picture says a thousand words.

Is there any chance that President Trump will change course so that the Republican party does not become the Coronavirus Party? Somebody will need to convince him. Let's be real: he is unstable and not a genius. But he is also running against a guy that can hardly complete a sentence.

Personally, it is depressing to me that once again, this is the best that either party can offer. The governors that Trump installed don't have to be geniuses, they just have to show that they are stable. And a stable governor does not go around trying to get his constituents to join him in Fantasyland.

Thankfully, we have a stable GOP governor in Ohio. His instincts have been great, but Mike DeWine was pushed into reopening a little prematurely by his own party.

I would sure take him over Washington state Democratic Gov. Jay Inslee. Imagine what we would think of Gov. DeWine if he just decided to abandon large swaths of Cleveland and turn it over to anarchy, like Inslee has done in Seattle.

Republicans have plenty of their own moron governors, like Florida's Ron DeSantis. I am pretty sure he was the mayor of Amity in the movie "Jaws," who encouraged tourists saying, "Come on down the water's fine!"

Or like Texas Republican lawmaker Louie Gohmert, who refuses to wear a mask on the House Floor. He still hasn't figured out that masks are for protecting each other. It is not surprising that Texas is undergoing one of the biggest spikes in America, which has the honor of being the most infected country in the entire world. Most of the states that threw caution to the wind are seeing that. What a surprise!

In potentially good news, Vice President Mike Pence is suddenly imploring Americans to wear face masks, practice social distancing and stay away from senior citizens. Wow, what a visionary! Better late than never, Mike. The United States has already surpassed 2.5 million confirmed cases, and Pence is the head of the coronavirus task force.

Still, Pence commended Texas Gov. Greg Abbott, a Republican, for his "decisive action" in reopening the state's economy in early May. So decisive that the state's hospitals are experiencing a surge in patients amid skyrocketing infection rates. Now, Pence is praising Abbott for scaling back some reopening. Make up your mind, Mike!

Arizona, Florida and Texas have emerged as the country's latest epicenters after reporting record numbers of new infections for weeks. Some of their testing centers have become overwhelmed by an influx of patients. Residents are reportedly waiting several hours in their cars or on foot to receive a test.

Tom Frieden, former director of the Centers for Disease Control and Prevention, warned Sunday that the outbreaks in states that eased restrictions – and have since reinstated many of them – will continue to worsen in the next few weeks because such figures tend to lag.

Frieden told Chris Wallace of Fox News yesterday that the positive cases identified through testing are only "a tip of the iceberg ... As a doctor, a scientist, an epidemiologist, I can tell you with 100% certainty that in most states where you're seeing an increase, it is a real increase," Frieden said. "It is not more tests. It is more spread of the virus."

The Republicans better get their heads out of you know where and quick. Or change their logo to the one in the cartoon.