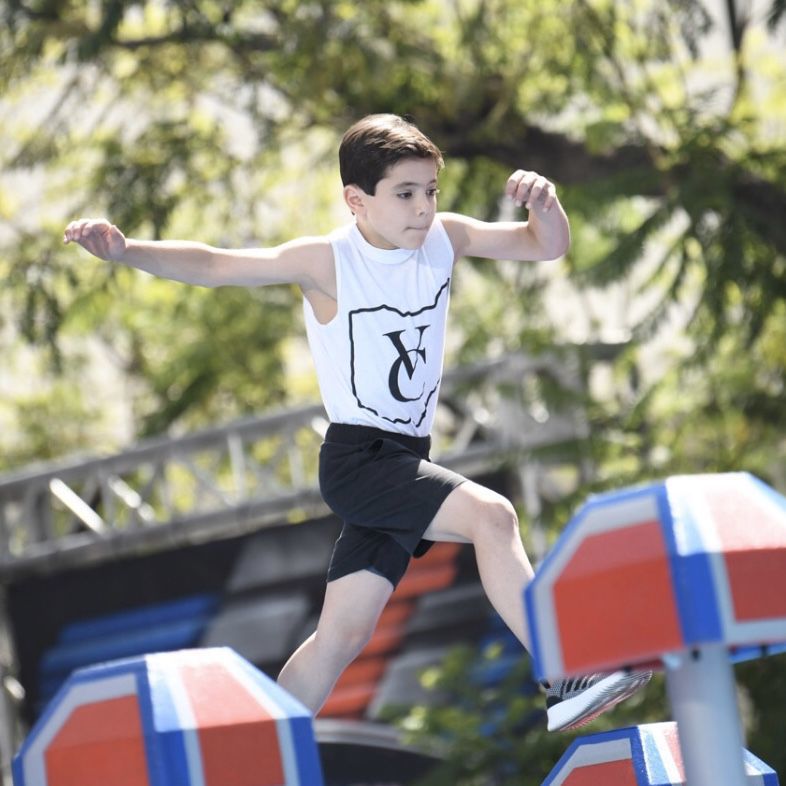 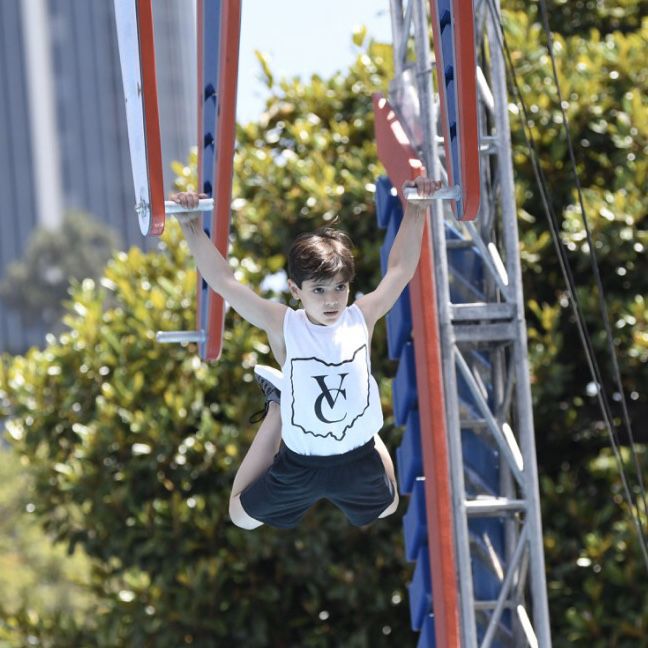 Caneles' main coach was his father, Mike, a member of the Ohio State University 1996 National Champion gymnastics team with help from his mother, Dominique Moceanu, the youngest competitor in U.S. Olympic history, earning a gold medal at the 2018 games.

Caneles' main coach was his father, Mike, a member of the Ohio State University 1996 National Champion gymnastics team with help from his mother, Dominique Moceanu, the youngest competitor in U.S. Olympic history, earning a gold medal at the 2018 games.

HINCKLEY – Tackling an obstacle course containing a set of shrinking steps, a flying squirrel or a spider wall, was no problem for Hinckley Elementary school sixth grader, Vincent Canales, an up and coming gymnast. The young athlete recently returned from a trip to Los Angeles where he competed in American Ninja Warrior Jr., one of the top youth television shows in America. Just to compete, Vincent competed against 10,000 applicants for a spot on the show.

American Ninja Warrior Junior is an American children’s sports competition game show on Universal Kids that premiered in 2018. It is the children’s edition of American Ninja Warrior and American Ninja Warrior; Ninja vs. Ninja. The show is immensely popular and is in its second season. There are no teams in the show; rather each athlete competes individually within three age groups (9 and 10, 11 and 12, 13 and 14). Each age group has four contestants with no separate boys’ and girls’ competition. There are three winners per episode, one for each age group. Vince competed in the 9 & 10 year-old competition. Final winners are not announced until the end of the season.

The competition itself involves young athletes running a modified obstacle course of American Ninja Warrior. For instance, the shrinking steps involved tackling steps that get smaller and smaller and Canales said this obstacle “was really a test of agility and balance.”

Canales is no novice when it comes to agility as he started athletic training at age six months. While it may seem early to enter the world of athletics, Vincent is part of a family where athletic performance is a way of life. His mother is Dominique Moceanu, was the youngest gymnast in U.S. history to compete in the Olympics with Moceanu earning a gold medal. She now operates her own Gymnastics Studio, Dominique Monceanu Gymnastics Center and Carmen Yoga Studio, in Medina. Vincent’s father, Dr. Mike Canales, was a member of The Ohio State University’s 1996 National Champion Gymnastics team.

Vincent and his father said they relied, for the most part, on Vincent’s regular gymnastics training to prepare for the competition. Both father and son are also fans of the Martial Arts. The family arrived in Los Angeles about four days prior to the competition.

“They showed us the course and we had a brief chance to try it,” said Vincent. “I would say it was similar to what I expected. We started with the shrinking steps moving on to such obstacles as the flying squirrel and cargo net, involving grip strength and momentum. The iconic obstacle of the show is the last one, a nearly vertical climb called the warped wall.”

“I was happy with my performance and my goal was to remain calm and composed,” said Vincent. “I think I accomplished that and also my goal of making my family, northeast Ohio and all of Ohio proud.”

In the phone interview with The Post Newspapers, the joy and pride that Dominique and Mike have for their son oozes over the telephone. However, you couldn’t help but wonder that for Dominique, is it more nerve wracking to compete yourself or watch your son compete?

“It is definitely harder to sit on the sidelines,” said Dominique. “I will say that it has been great watching this next generation in my own family and in the studio. During the training for American Ninja Warrior Jr., my husband, Mike, did most of the work. It was really special to see the bond that they formed; I was just along for the ride having a gymnastics studier to run.”

Life isn’t all athletics around the families Medina home; Vincent said he likes the challenge of a Rubik’s cube. His athletic goal is solid and clear in his mind.

“I want to compete on the American gymnastics team in the 2028 Olympic Games,” said Vincent.