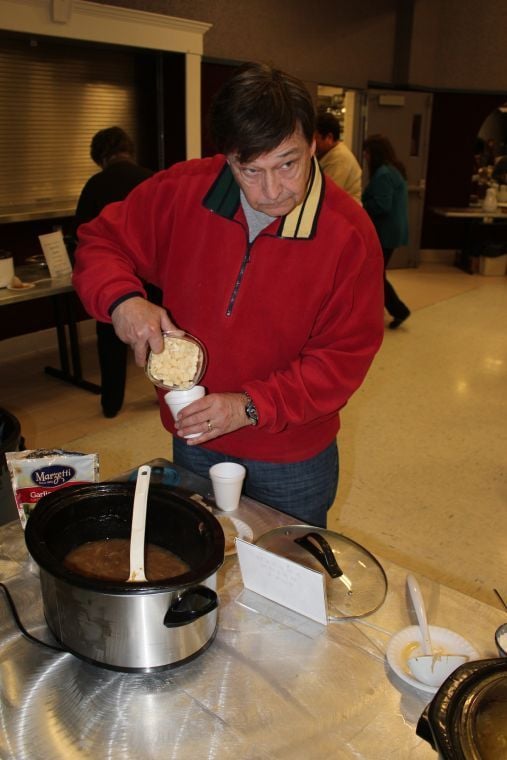 Denny Franz decides to add a few crackers to his soup at the Strongsville Historical Society Soup Supper event at the Ehrnfelt Event Center Feb. 25. 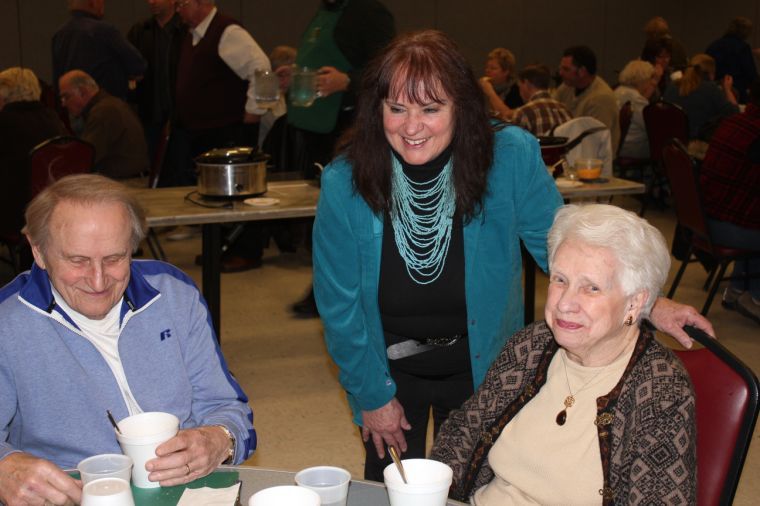 Strongsville Historical Society President Marsha Lundgren makes sure the soup that Tom and Evelyn Nichols are tasting is to their satisfaction. The society held its annual Soup Supper fundraiser at the Ehrnfelt Event Center Feb. 25. 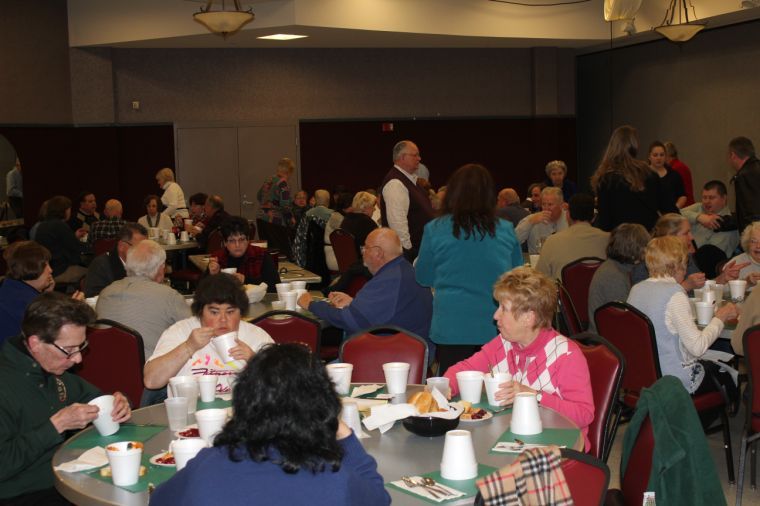 Seats were hard to come by at the Strongsville Historical Society Soup Supper. The annual fundraiser took place Feb. 25, postponed from its original Jan. 28 date due to inclement weather.

Denny Franz decides to add a few crackers to his soup at the Strongsville Historical Society Soup Supper event at the Ehrnfelt Event Center Feb. 25.

Strongsville Historical Society President Marsha Lundgren makes sure the soup that Tom and Evelyn Nichols are tasting is to their satisfaction. The society held its annual Soup Supper fundraiser at the Ehrnfelt Event Center Feb. 25.

Seats were hard to come by at the Strongsville Historical Society Soup Supper. The annual fundraiser took place Feb. 25, postponed from its original Jan. 28 date due to inclement weather.

STRONGSVILLE – If any winter has cried out for soup it’s the one we are currently enduring. Cold temperatures call for a bowl or two of liquid warmth. And if the most basic of winter foods is your thing then Strongsville’s Ehrnfelt Event Center was the place to be Feb. 25.

Ironically, the date for the Soup Supper was postponed from Jan. 28 due to incredibly cold temperatures and wind chills. But you can’t keep a good organization and event down, as seats were hard to come by.

Historical society member Dale Finley made southwest corn chowder, a staple he brings to the event every year.

“I cook a lot at home and I like to make soup because it’s pretty easy,” he said. “On a cold night a good soup makes a good meal.”

Evelyn and Tom Nichols were enjoying a sausage and spinach soup.

“It was very good,” Evelyn commented. “It looked good and it tastes good.”

Dana Martin was an equal opportunity soup taster. She had chicken paprikash, stuffed cabbage, navy bean, and sauerkraut soups, as well as Finley’s corn chowder. There was a method to her soup tasting madness.

What keeps bringing the historical society member back year after year?

“I am such a soup person,” Martin said.

The Soup Supper event began as a small meeting of historical society members. It eventually grew to become large gathering and fundraiser it is today.

“It used to be bring your own mug,” said Don Shearer, Soup Supper chairman. “There are a lot of new faces here tonight.”

And the soups go fast.

“I saw someone scraping the bowl. I told them I’d lean in,” Shearer said.

Historical society President Marsha (Kovach) Lundgren returned to her native Strongsville after spending the previous 31 years in Utah as a fundraiser for the University of Utah and Southern Utah University. The marriage between the society and Lundgren seems to be a perfect one.

Howard Chapman, the founder of the Strongsville Historical Society, was Lundgren’s seventh-grade teacher during her formative years growing up on Howe Road.

“That’s neat because I’m just carrying on in his footsteps. I feel honored,” Lundgren said. “I’m real happy to be back. This was my home. My heart is here. I was in Ohio my first 31 years. It was a good life out there, but it was time to do something different. It’s a busy job and I adore the people.”

As a career fundraiser Lundgren realizes the importance of events like the Soup Supper to the historical society’s ability to offer programming throughout the year and maintain the historical village.

“We rely a lot on these events and donations. Hopefully I can write some grants and get us more money,” she said. “It’s a volunteer organization. No one gets paid. We all just pitch in and help out.”

The weather has played havoc with historical society meetings and events in 2014.

“It (postponing the Soup Supper) was a very difficult decision to make because I had to cancel my very first board meeting and then had to postpone this,” Lundgren said. “It’s been so cold and difficult just to get into the village just to get things done. Our opening day is in April.”

Strongsville has changed dramatically since the last time Lundgren, who graduated from Strongsville High School in 1967, lived here.

“I was here before the freeway and mall went in,” Lundgren said. “It was a cornfield until it changed off with soybeans right next door to us.”