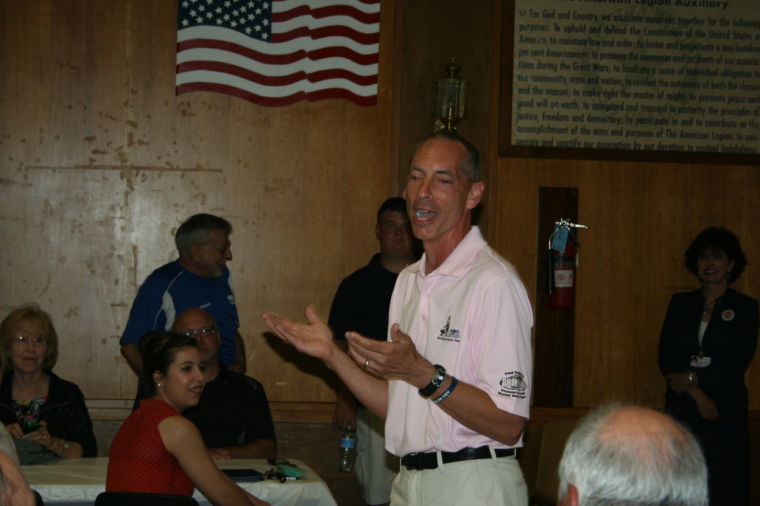 Mark Arnold, co-director of American Blind Golf, welcomes the crowd at the dinner. 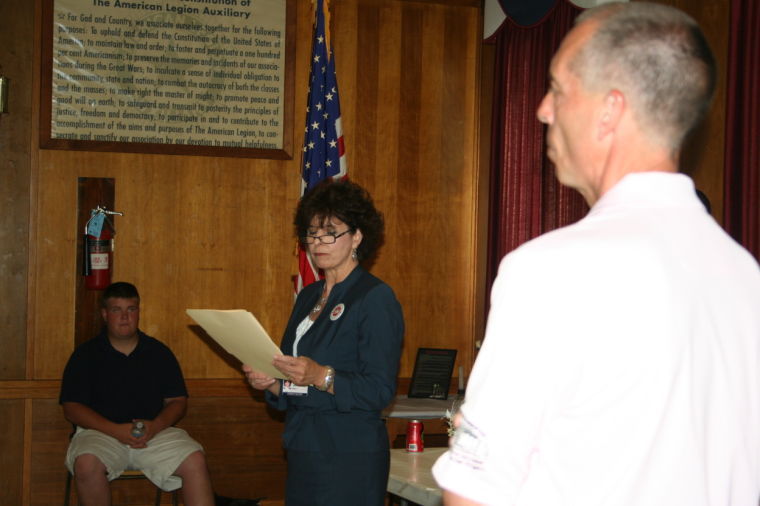 Mayor Robin Laubaugh delivers a proclamation at the dinner to honor American Blind Golf and the Wounded Warrior Project.

Mark Arnold, co-director of American Blind Golf, welcomes the crowd at the dinner.

Mayor Robin Laubaugh delivers a proclamation at the dinner to honor American Blind Golf and the Wounded Warrior Project.

WADSWORTH – Blind golfers from all over the country and from as far away as western Canada traveled to the area in late June for the 10th annual American Blind Golf Tournament at Ridge Top Golf Course.

While the sport is a favorite pastime for many of them, Mark Arnold believes these individuals traveled to Ohio for the tournament for a bigger reason than just their love of golf.

“They came here not just for the competition, but because they adhere to our goals to motivate, inspire and serve,” said Arnold, a Wadsworth resident who is the co-director of American Blind Golf.

Proceeds raised from the tournament and from other fundraisers throughout the year benefit the Wounded Warrior Project, the Foundation Fighting Blindness and also help to fund adaptive scholarships for area youths who are visually impaired.

ABG has donated nearly $15,000 to the Wounded Warrior Project over the last few years and since its inception a decade ago, the organization has raised nearly $100,000 and has provided more than 40 area visually impaired youths with special equipment that helps them to better function in their day to day lives.

Stetson Elliot, of Texas, was one of three members of the Wounded Warrior Project who traveled to the tournament this year. While he isn’t eligible to play in the tournament, he said he still tries to attend the event every year.

“This group has become like a family to me,” Elliot said. “It is good to come out and see these guys and catch up with them.”

Wadsworth’s American Legion Post 170 organized a dinner for the blind golfers and the wounded warriors in their facility on Main Street June 26. Members of the American Legion and VFW Women’s Auxiliary prepared a meal and Mayor Robin Laubaugh was on hand to deliver a proclamation.

“We are appreciative for all of your great support and all that you have done for our country,” Laubaugh said. “We are also very appreciative of the American Legion and the VFW. You are the ones who keep us aware of opportunities such as these.”

American Legion Post 170 Commander Joe Rodgers said that his group is always more than happy to lend support to ABG and the Wounded Warrior Project. He said the American Legion would like to host this special dinner every year if the groups will allow it.

Rodgers said he especially wants to be sure that the Wounded Warrior Project is well supported. He said he remembers the heartache that his mother dealt with when his brother returned home from Vietnam and the VA hospital ignored the signs of negative effects that he suffered from.

“They told him ‘Oh, you’re fine,’” he said. “I am not going to let that happen to these young guys.”